At the Second Chance Adoption League in Morris Plains, New Jersey, an adoptable – well sorta – two-year-old Chihuahua has been described as “demonic” needs a special home, and it is believed there is someone out there for Prancer. 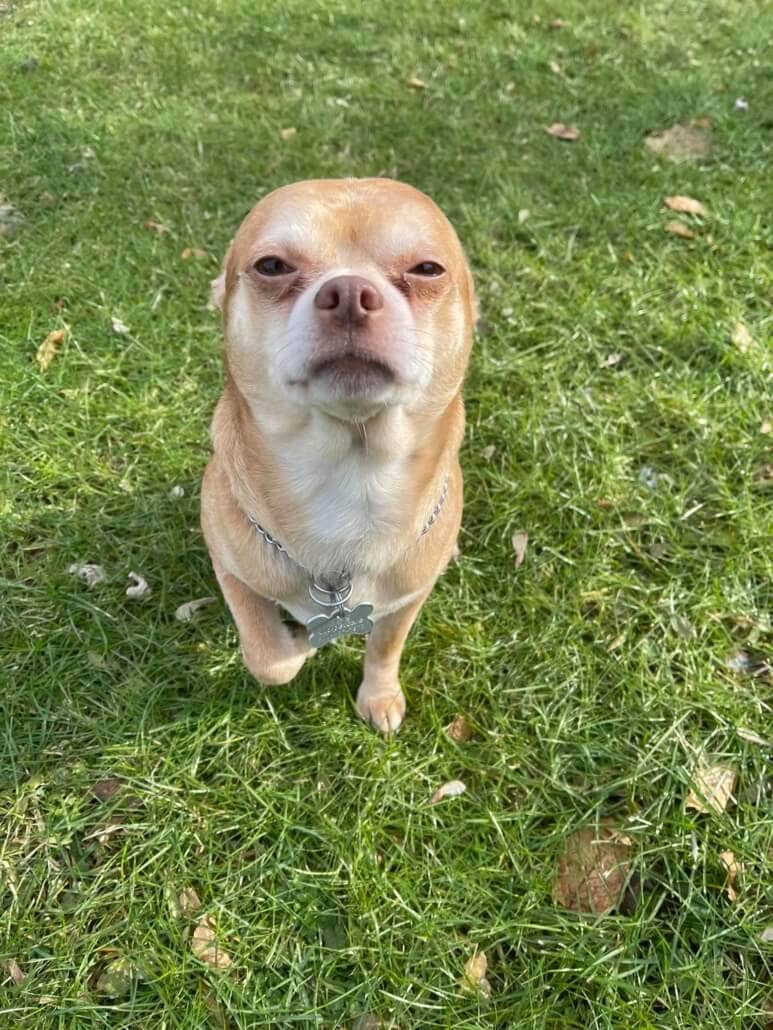 Tyfanee Fortuna, who is Prancer’s current foster mom, posted photos and a video of the dog hoping to find a way to make the dog which she described as a “haunted Victorian child,” “a Chuck doll in a dog’s body,” and a few other vivid phrases more desirable. Let’s begin with the photos of Prancer are adorable. Her tongue in cheek narrative of this miniature little terror – well then begin here: 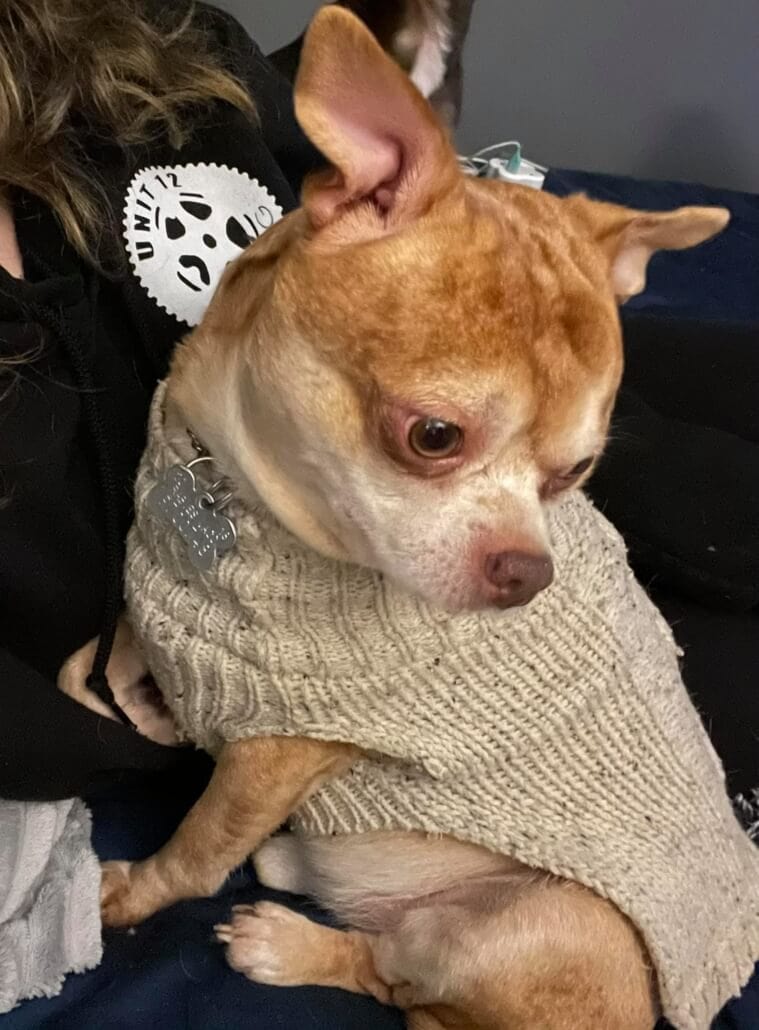 “I’ve tried for the last several months to post this dog for adoption and make him sound …palatable. The problem is, he’s just not. There’s not a very big market for neurotic, man hating, animal hating, children hating dogs that look like gremlins. But I have to believe there’s someone out there for Prancer, because I am tired and so is my family. Every day we live in the grips of the demonic Chihuahua hellscape he has created in our home.”

Tyfanee noted that Chihuahua owners do understand the “50% hate and 50% tremble” personalities of the breed and then proceeded to tell everyone how Prancer became part of the rescue effort and her tiny charge. 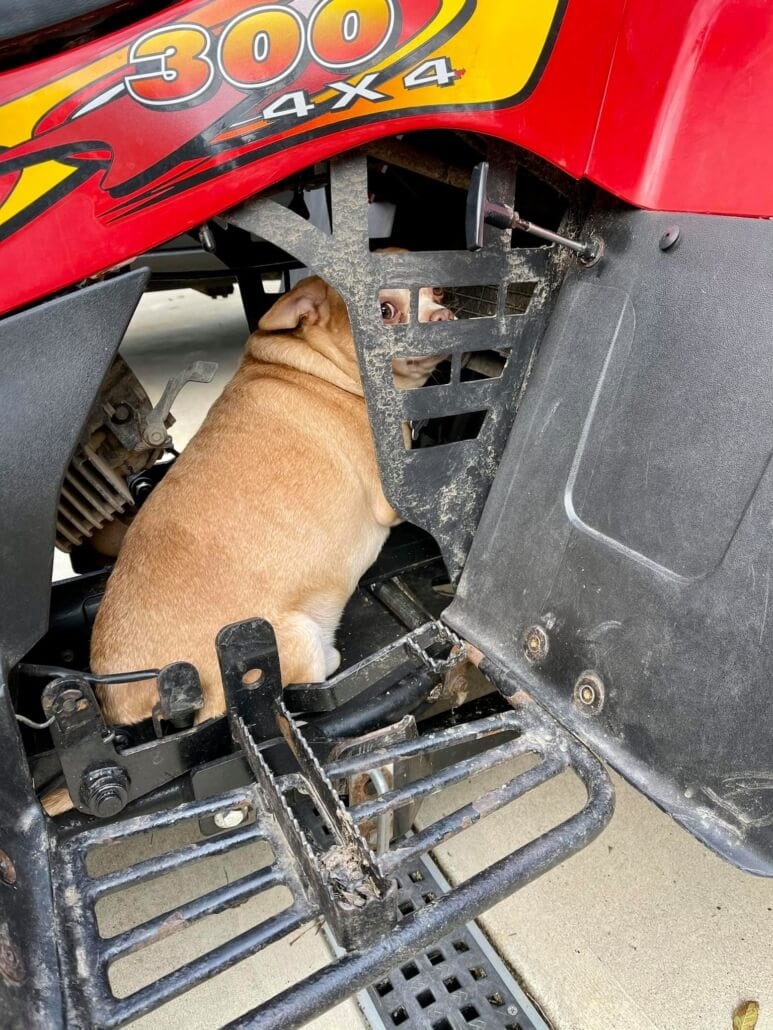 “Prancer came to me obese, wearing a cashmere sweater, with a bacon egg n cheese stuffed in his crate with him. I should have known in that moment this dog would be a problem. He was owned by an elderly woman who treated him like a human and never socialized him. Sprinkle in a little genetic predisposition for being nervous, and you’ve concocted a neurotic mess, AKA Prancer. His first week he was too terrified to have a personality. As awful as it sounds, I kind of liked him better that way. He was quiet, and just laid on the couch. Didn’t bother anyone. I was excited to see him come out of his shell and become a real dog. I am convinced at this point he is not a real dog, but more like a vessel for a traumatized Victorian child that now haunts our home.”

And as Prancer’s real personality emerged, Tyfanee discovered Prancer only likes women and has bonded to her; fiercely has taken his job for protecting Tyfanee very seriously.

“Prancer only likes women. Nothing else. He hates men more than women do, which says a lot. If you have a husband don’t bother applying, unless you hate him. Prancer has lived with a man for 6 months and still has not accepted him. He bonds to a woman/women, and takes his job of protection seriously. He offers better protection than capitol security. This also extends to other animals. Have other dogs? Cats? Don’t apply unless they like being shaken up like a ragdoll by a 13lb rage machine. This may be confusing to people, as he currently lives with my other 7 dogs and 12 cats. That’s because we have somewhat come to an agreement that it’s wrong to attack the other animals. But you know that episode of The Office where Michael Scott silently whispers “I’ll kill you.” to Toby? That’s Prancer having to begrudgingly coexist with everyone when I’m around.”

There is no room for children in Prancer’s life, most likely because he never met any, but with the demonic traits he has shown towards men and other pets, keeping children away from him is a great idea. Prancer wants to be the one and only.

And now we get to the good part; the section everyone has been waiting for, and that is what are Prancer’s good traits and in what kind of home would he do best? After all, Prancer is only two-years-old, and these little guys are known to have long life spans.

“So what are his good traits? He is loyal beyond belief, although to tell you a secret his complex is really just a façade for his fear. If someone tried to kill you I can guarantee he would run away screeching. But as far as companionship, you will never be alone again. He likes to go for car rides, he is housebroken, he knows a few basic commands, he is quiet and non destructive when left alone at home, and even though we call him bologna face he is kind of cute to look at. He also “smiles” when he is excited. His ideal home would be with a single woman, a mother and daughter, or a lesbian couple. You can’t live in an apartment or a condo unless you want him to ankle bite your neighbors. We already addressed the men and children situation. If you have people over he would have to be put away like he’s a vacuum. I know finding someone who wants a chucky doll in a dogs body is hard, but I have to try.”

We all know the power of social media; the good, the bad and the best part of it – when someone adopts and loves an unwanted pet from a shelter or a rescue and dotes on them for the rest of their lives. Share Prancer’s plight; surely there is that special someone who has been looking for this boy.

Prancer is available through Second Chance Pet Adoption League. He will only be placed locally within a few hours drive so that his adopter is able to come meet and make sure of a personality match, and the rescue is able to assist with his transition if needed and make sure he comes back  if things don’t work out for any reason.