For years, Laura Seymour had a standing appointment each day in a very unusual place — standing by a neighbor’s yard, she would watch Takia, an Akita pup, and her heart would break.

Chained to the tree, Takia was forced to watch the world go by with little more than a bowl of rainwater and whatever toys Laura brought her.

For her part, Laura was unable to intervene because animal control had decided Takia’s abusive and neglectful situation was not worth intervening in. But Laura made it her mission to give Takia whatever comfort she could in the meantime. 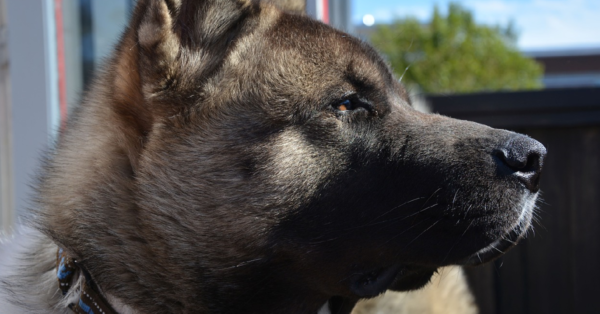 When Laura went away over the summer, Takia developed a nasty ear infection that began eating away at her fur and skin. That’s when Laura contacted animal control for a second time, and when they finally decided that Takia’s situation had gotten out of control.

Her neglectful owner was made to surrender her, and Laura was there to step in. When officials asked her if she knew anyone willing to take Takia in, she volunteered in a heartbeat.

Now, the two of them, along with Ace the chihuahua, are living their best life!

“When she was chained to a tree for 5 years, she never got to socialize with other dogs so she has no idea how to act around them. She wants to play with other dogs so bad but when they get in her bubble, she tends to not be a fan at all. However, with Ace we have been extremely lucky. They totally tolerate each other and actually enjoy each other’s company!” Seymour wrote on Instagram.

In another post, she added, “I think she is pretty happy with her life!”