In Spencer County, Kentucky, the animal control director who shot and killed an injured dog has been suspended. The Chihuahua named Abigail had been struck by a car on Sunday night.

According to the Courier Journal, and the Spencer County Watchdog, animal control officer James Houchin found the Chihuahua injured after a Good Samaritan called in to report the dog and called animal control supervisor David Wood. The supervisor told Houchin to bring the dog to his home where Wood would shoot and kill the dog; the dog was allegedly too injured, and the medical cost to care for the dog at Blue Pearl would have been too costly.

The dog was unable to use her back legs or tail and appeared to have a broken back. Based on photos taken by the person who originally found the tiny dog lying in the road, she was alive, lifted her head and had been looking around – as if waiting for someone to help her. Instead Wood shot the dog and threw it in a dumpster. 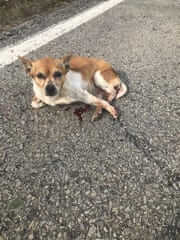 There is no indication the nine-year-old dog was ever scanned for a microchip nor was her body saved in a freezer pending the identification of her owner. The owners, Tommy Lewis and his wife had been waiting for Abigail to come home after she had been missing for the weekend.

“Wood said she was too far gone, so he blew her head off with a 12-gauge shot gun. But I believe in my heart that if they had taken her to Blue Pearl she would be at home with us today,” stated Lewis.

Mike Moody, the Spencer County Magistrate said the county’s fiscal court voted to suspend Wood. Kentucky law prohibits anyone shooting a dog to death unless the animal is suffering. Wood’s attorney said his client was within his rights according to law.