The recent Corona Virus threat is impacting shelter animals in the United States as well as abroad. Thankfully, no one is throwing their pets out of the windows as in China or having their pets seized and euthanized for fear they are carrying the virus.

However, adoptions and fosters for shelter dogs has slowed due to many being afraid the dog they take will be infected and contagious.

All Things Pawsible,  a 501 (c) 3 in Miami-Dade is desperate for adopters and fosters for the dogs in their care, so they can continue to pull more needy dogs from Miami-Dade.

Pet overpopulation is a serious problem in Miami-Dade, Florida. Statistically, 27,000 pets end up at Miami-Dade Animal Services each year. Many of these homeless dogs are sick, injured, or terribly frightened.  Unfortunately, such physical impairments or behavioral issues lessen their chances of adoption. Often, they are kept in a back area out of the public eye to languish until they are taken on that last walk.

All Things Pawsible attempts to rescue as many of these forgotten and unseen dogs as possible but due to a lack of fosters or recent adoptions they are unable to take on more. Some of their rescued dogs have needed surgery to repair broken limbs, others may need additional rehabilitation time and specific medical care.

Here are some of the current dogs needing out of Miami-Dade due to physical and emotional handicaps.

Although he was found on the streets and is in rough shape, this five-year-old brown and white American Bulldog is a big sweetheart and is also good on a leash.

Here is his Pet Harbor page:

Inquiries about Bruce can also be made at:

Saki, (ID number #A2105944) is  another dog brought into Miami-Dade Animal Service. Unlike Bruce who was a stray, Saki was surrendered by her owner back on December 13, 2019. She has been suffering from extreme fear and is cage reactive. These issues got her placed in the Small Dog Fearful Section of the shelter for the past three months where no one can see her.

According to staff members Saki is about seven years old and a spayed black and white terrier mix. Although she is scared, she can be handled if approached slowly. Let her warm- up to you.

No dog should be killed for being fearful, sick or injured.

More info on Saki is available on the Pet Harbor site:

To help alleviate the pet overpopulation at Miami-Dade Animal Services, please visit their available pets on Pet Harbor.  However, all adoptions must be done in person at Miami-Dade. 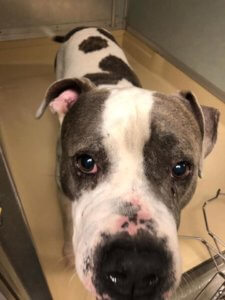