Sheriff’s deputies in Martin County, Florida, rescued a dog who was left behind on a boat after her owner was taken to a hospital for displaying Covid-19 symptoms. The Martin County Sheriff’s Office issued a release about the dog rescue on April 3, writing:

The owner of a liveaboard vessel anchored in the Manatee Pocket made a desperate plea to MCSO to rescue his dog after being hospitalized for possible COVID-19.

The dog’s owner had reached out to the sheriff’s office with a desperate plea for help after learning that he would be hospitalized because of symptoms of the widespread virus. The Sheriff’s office writes:

MCSO’s Marine Unit worked with Animal Services Officers to create a plan that would ensure the safety of the officers boarding the boat and the rescue of the stranded animal. The team dressed in full personal protective gear and headed out to the vessel, where they boarded the boat and located the dog.

The dog was transported by animal services personnel to a care facility. The authorities praised those involved with her rescue, writing:

Animal Services Officers then transported the dog to a facility where she will remain until his owner recovers from the illness. Nice work by an amazing team dedicated to getting the job done, despite the circumstances. 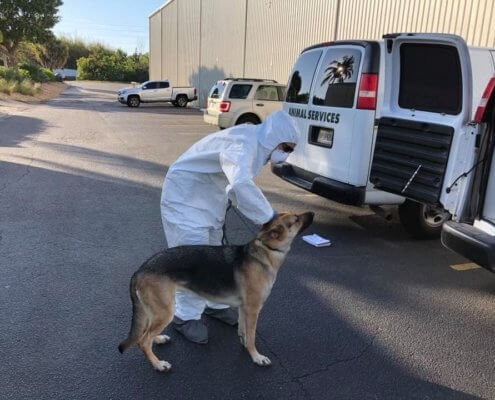