The RSPCA has started an animal cruelty investigation in Adelaide, Australia, after a disturbing video surfaced of a man “choking” a dog on Wednesday. The video showed the man pulling up the either lost or stray dog by his neck followed by placing his knee on the dog and holding the animal down on the sidewalk.

According to the Daily Mail, a group of women can be heard yelling at the man to “get off” the dog. An exchange from witnesses argued both sides. One woman stated no one should treat a dog this way, while another man defended  the man’s crude treatment of the animal, stating the dog had been “savage.” 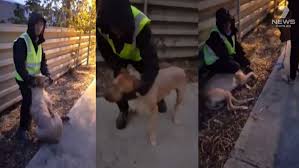 The women were finally able to convince the man, who had been wearing a yellow working vest with a dark gray hoodie, to release his grip around the dog’s neck and put a leash on him. As the man stood up, he then yanked the dog by his collar.

The dog has since been taken to the Animal Welfare League where he has been deemed to be “friendly and in good condition.” Sadly, he was not microchipped, but based on the dog’s condition, he was not a stray. The owner is urged to come forward.