On Tuesday, a dog was saved from a death sentence after his owner left him chained to a bed in an abandoned home in Pennsylvania. The horrifying situation was recounted on the Carbon County Animal Shelter Facebook page:

The State Police with a pup a landlord reported abandoned. He claimed dog has been in room for 6 days & dogs owner has not been around. This pup was chained to the bed.

Adding to the cruel situation…a bowl of dog food was left outside of the chained dog’s reach; in eye sight, but unavailable for him to access. The post states:

No water was spotted. The dog was in much distress & was forced to be in its waste. With property owners & Police permission we climbed through the window to free the dog. This person had changed the locked without the property owners knowledge.

The dog was grateful to the rescuers who brought food and water. The dog is now in the care of the animal shelter and charges are expected against the person responsible for the cruel abandonment. 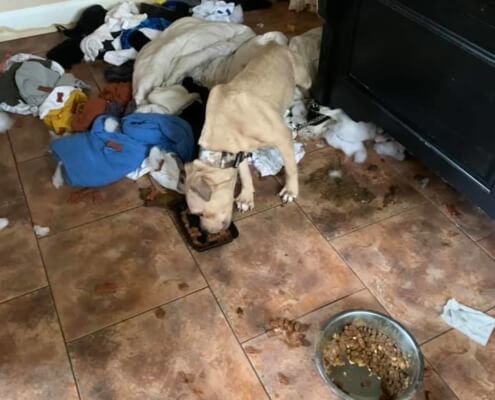