Buddy, a dog that escaped death row at Miami-Animal Services, is now missing, with his adopter under suspicion. For anyone who works or volunteers in the animal rescue world, one of the worst nightmares is having a dog you worked hard to save fall into the wrong hands.

This nightmare scenario unfolded for Noah’s Rescue located in Broward County, Florida. Noah’s Rescue founded by Flor Vargas has a mission statement promising to rescue as many abused and neglected animals possible and place them in loving, forever homes.

True to their promise, they have pulled many dogs from Miami-Dade Animal Services in South Florida, mainly those that are close to being euthanized. One of these dogs was a brindle American bulldog named Numero, rescued by Noah’s Rescue on February 22, 2020 when he was on death row.  He had been dumped by his family.

When no one showed any interest in adopting Numero, this scared and abandoned boy was moved to death row. A plea went out to local rescues to help him and pledges were collected. Everyone who pledged for Numero breathed a sigh of relief when Noah’s Rescue stepped in.  Perhaps there would be a happy ending for the dog that had been failed by many in his short life?

Once rescued, Numero’s name was changed to Buddy, and he went to live in a foster home on March 1 2020 under the care of Kim Leger, pending an adoption offer. On March 10, 2020 Kim stated she had someone interested in adopting Buddy. The woman interested in him was named Jennifer Nicole McCune also known as Jennifer Myers; a resident of Deland, Florida.

Noah’s Rescue director Flor Vargas was at first hesitant to allow Jennifer to adopt Buddy due to Jennifer’s troubled past. Apparently, Jennifer had recently lost her previous emotional support dog and was feeling saddened and depressed. That, along with the fact that Jennifer promised her church was willing to pay for Buddy to be trained as her new emotional support dog, convinced Flor to give Jennifer a second chance and adopt Buddy.

So, on March 12, 2020 Buddy was officially adopted. There was a very happy post on the Noah’s Rescue page on March 13, stating:

IT IS WITH GREAT PLEASURE THAT TODAY OUR BOY NUMERO NOW BUDDY HAS BEEN OFFICIALLY ADOPTED!

Buddy I love you & you will be loved forever by your best friend!

Sadly, this joy was short lived. It turns out everything Jennifer promised about her church helping was a lie. On March 26, 2020 Flor got a call from Kim (Buddy’s foster) that Buddy was missing. According to Jennifer Myers, she left Buddy under her daughter’s care. Her daughter was bathing and left Buddy outside in the backyard to do his business. When she came outside, he was gone. Then, Jennifer changed that story to saying Buddy was stolen.

Changing the story of what actually happened, raised suspicion among Flor Vargas and other members of the rescue community. To add to this suspicion, when Flor Vargas and others concerned about Buddy, contacted Jennifer trying to get more info, she would not respond to calls or texts and blocked all who questioned her on Facebook.

Even more disturbing is Jennifer Myers Facebook profile image proclaiming “I’m not like other girls, I’m Satan.” This adds to the growing fear that Buddy is in danger. Jennifer Myers knows what happened to Buddy, but she will not talk.

It truly is a tragedy for the rescue and the dog when a case like this occurs. Buddy has been failed repeatedly.  First by his original family who dumped him to be killed at MDAS, then by the next person, Jennifer Myers who promised to take care of Buddy and give him a good home.

Buddy was last seen in the Deland, Florida area on Broadway and High Street. He was a wearing a black collar and is neutered and microchipped. If anyone has any news or knows what happened to Buddy, please contact 754-252-0877. 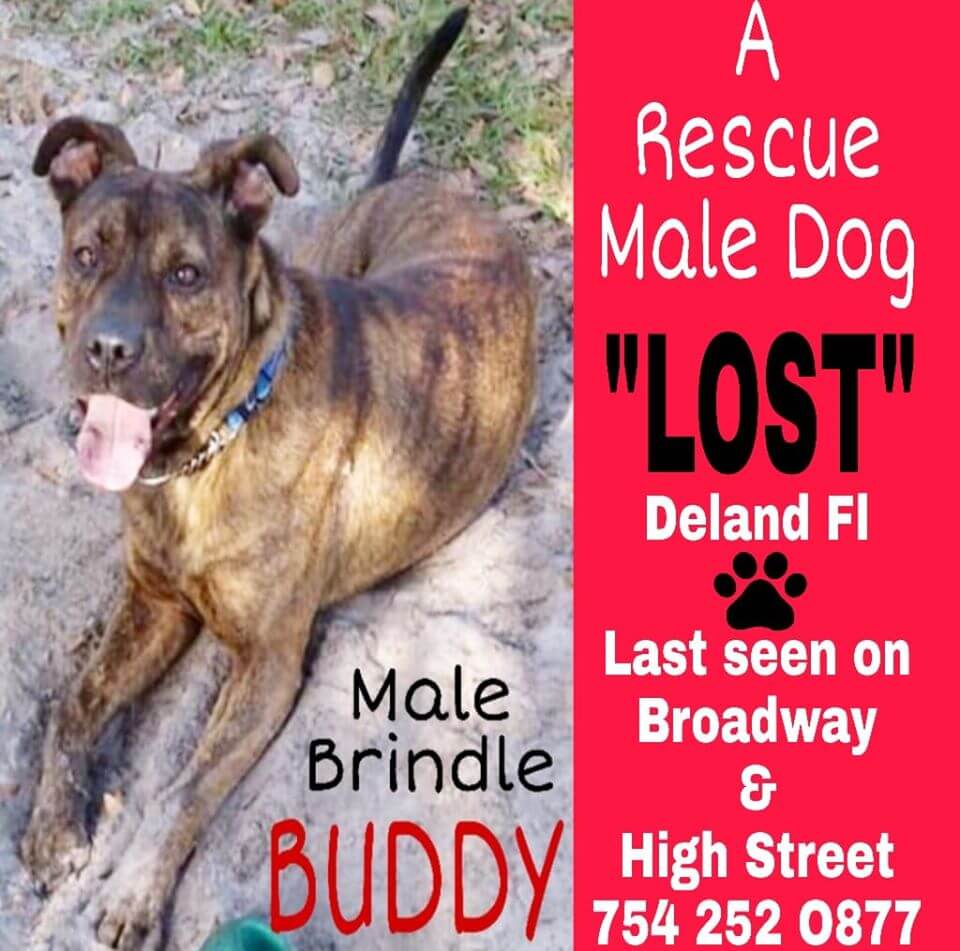