A white dog in the small Greek town of Nafpaktos, TK exemplifies the loyalty and love of our four-legged companions. His story deserves to be told.

According to the Greek Reporter, a 40-year-old man named Haris was tragically killed on Old Ring Road on the River Evinos 18-months ago when his vehicle collided with a cement mixer. Residents of the area report that Haris’s dog was at the point of the accident, several miles from the man’s home, and has remained there since. 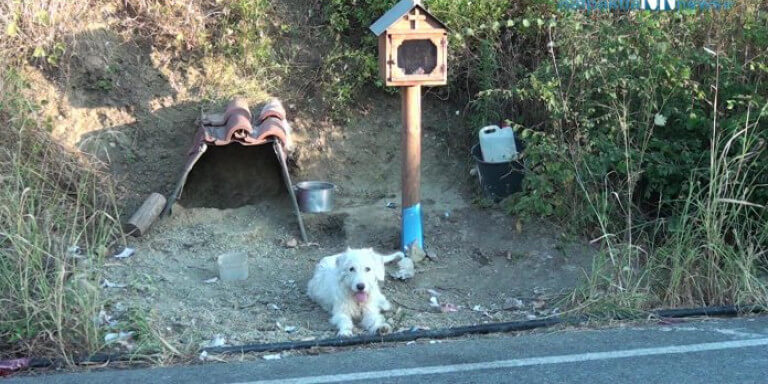 Although residents have tried to adopt the dog and give him a new home, there is no consolation for this loyal pooch, except for him to return to the exact point of the accident everyday.

A roadside shrine remains at the site of the accident, and also includes a small shelter for the dog equipped with a blanket and his food. The pup has never been named, however people refer to him at the “Hachiko of Nefpaktia” – named after the real life Akita who had been owned by a professor at Tokyo University. Every day Hachiko would walk to the train station to meet his favorite human; that is until one day his master died of a cerebral hemorrhage when the dog was only two-years-old. Until Hachiko died, he would return to the train station everyday waiting for his human to return; at the end he was buried next to his beloved master. A statue of the dog was later erected at the National Museum of Nature and Science to honor his loyalty.