On March 7, dozens of dogs were rescued from an abandoned home near Carthage, Tennessee. Animal Rescue Corps (ARC), a nonprofit animal protection organization, responded to the property after receiving a call for help from Waggin’ Tails, a local rescue group.

Pictures taken from inside of the home reveal the dismal conditions the 48 dogs were suffering in. In a release, the non-profit describes what was found:

Forty-eight dogs were found in and around an abandoned home. Many of the dogs were inside the home which contained large amounts of feces, urine-soaked floors and furniture, and high levels of ammonia gas.

The remainder of the animals were running loose around the debris-strewn property. All of the dogs were suffering in this dangerous environment; exhibiting physical conditions such as anemia, emaciation, eye injuries and infections, internal and external parasites, hair loss, skin infections, respiratory distress and infections, pregnancies, and other untreated injuries. 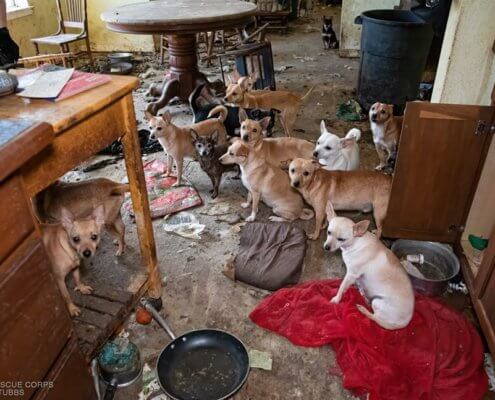 Tragically, the remains of dogs who did not survive were also found. ARC said that “at least” 10 dead dogs were found on the property.

All of the animals rescued were taken to ARC’s Rescue Operations Center in Lebanon, TN, outside of Nashville. The dogs received a thorough veterinary exam, vaccinations and any medical care determined to be necessary. ARC will care for the animals until they can be transferred to shelter and rescue agencies which will find adopters for them.

Donations to assist with the care for these dogs can be made here.