An emaciated and very frightened dog zipped up in a suitcase, weighed down with bricks and tossed in a lake in Pen Green, Corby, UK miraculously escaped. The brindle Cane Corso Italian Mastiff was discovered in a deserted field less than one-week ago. 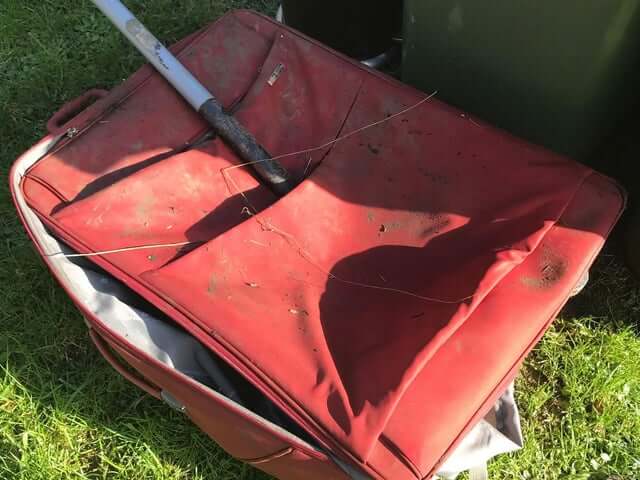 According to the Northamptonshire Telegraph, the Good Samaritan who found the dog, knew the pooch was in poor health and contacted the local animal shelter for help. The dog was transferred to an emergency veterinarian for treatment.

RSPCA Inspector Ann Bennett has been investigating the situation and reported a red suitcase containing bricks along with a spade had been recovered a short distance from where the dog was found. A microchip reveals the eight-year-old dog’s name is Alexis. When discovered she was soaking wet and the suitcase was half open.

“Alexis was in poor health, she was emaciated and had a large mass on her face so it suggests someone decided to dispose of her in such a callous way rather than seeking the veterinary treatments she was so desperately in need of,” stated Inspector Bennett.

And for the good news – Alexis is slowly beginning to feel better and has been receiving care at the RSPCA’s Newbrook Animal Hospital for a mammary tumor, arthritis, a chest infection and emaciation. She is friendly and loving the attention and care she has been receiving.

Anyone with information about Alexis is asked to contact the RSPCA’s appeals line at 0300 123 8018.

Get well soon Alexis. You are amazing.