At the Moreno Valley Animal Shelter in California, an English bulldog was returned shortly after he was adopted on Wednesday. His new family could not get him out of the car. 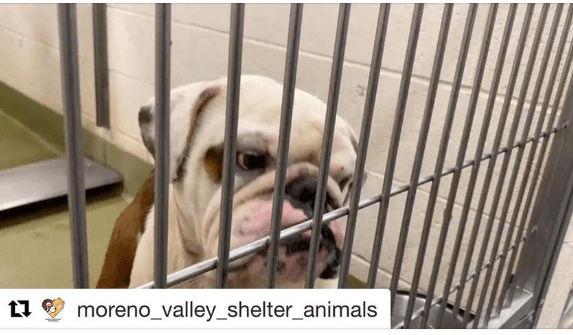 According to the Friends of Moreno Valley Shelter Animals, Desmond is now listed as “rescue only.” His story may seem a bit complicated.

“He’s a little neurotic, which on its own is not necessarily a bad thing,” volunteers at the shelter posted on social media. “Who wouldn’t mind living with someone who’s just a bit OCD about keeping a clean house?

It’s not the being ‘neurotic’ that is making him ‘rescue only’; it’s the trigger and the fact that we don’t know what it is or how to turn him off when it starts.”

His adopter was very excited to be able to take Desmond home and drove more than an hour to come to the shelter. She completed the adoption application and with Desmond in the car – drove home. It is not known what the trigger was that sent Desmond into his scary behavior. Suddenly the dog tried to bite anything and everything that came close to him or moved.

“He was erratic, uncontrollable and inconsolable. New mom had no other choice as she could not safely bring him into her home with her family, she had to bring him back.”

His new mom knew she would not be able to meet the challenging needs of Desmond and with a broken heart had to return to the shelter with him. She explained what happened and an animal control officer met the woman with a leash and a control stick. For two hours Desmond was out of control.

“The officer returned with Desmond growling, snarling and biting the control stick.” 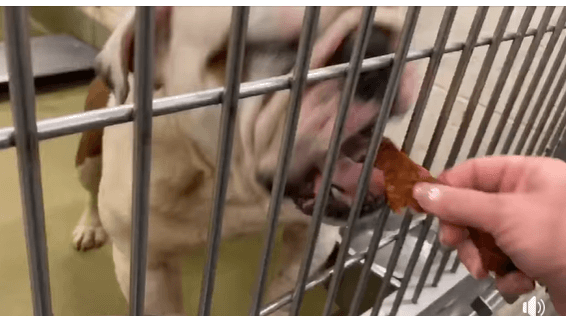 And today Desmond had no issues and was able to be moved to a different kennel with only a leash. As the video shows, he was given multiple treats and offered kisses afterward. What triggered him off on Wednesday is not known.

Desmond’s unpredictable behavior makes him ineligible to be adopted to anyone in the public. He needs a rescue with a professional trainer who can address his problems.