In Lyon County, Kentucky, a firefighter comforted a family’s dog after a deadly vehicular crash on Friday. The crash occurred at Exit 40 eastbound on I-24 killing one person. Another man was trapped in the car, and his faithful dog wouldn’t leave his side.

According to WlwtNews, the heartwarming photo was captured by Lyon County Highway Superintendent Jordan Yates with the Kentucky Transportation Cabinet. Fire Marshall Bill Compton comforted and cared for the dog while rescue crews helped to free the man entangled in the car. 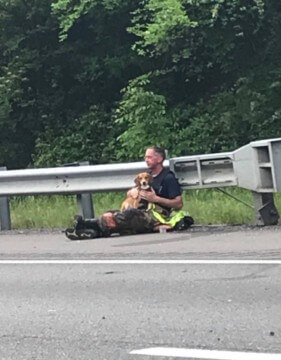 The dog named Lucky was not injured; the photo was taken after the trapped man had been freed and airlifted to the hospital.

“This Jordan with Lyon Co. State Hwy. We had a terrible accident on I-24 eastbound in Lyon County this morning. One fatality. I wanted to reach out and share a picture I took early on in the rescue. Our state Fire Marshall and Lyon County Native, Bill Compton, while attending to one of the trapped survivors, comforted and cared for the man’s dog that wouldn’t leave his side. Once the man was airlifted and the adrenaline began to wear off, I snapped this pic of an exhausted, emotional, and dedicated Bill Compton, resting and caring for the dog. It touched me and I felt I must share it.
Thanks,
Jordan”

A friend of the family picked Lucky up on Friday.