In the Laurel, Mississippi area, SCAR -Southern Cross Animal Rescue received a call on Monday morning asking for help. Two dogs were spotted in the middle of the road; one of the dogs had been deceased, and the other pup protected him – lying next to him as if waiting for help.

One board member from the rescue had been in the area and was able to act quickly before the surviving dog ended up with the same fate as his companion. Fortunately, a Good Samaritan had moved the deceased dog off the road, and the other pup still stayed close by. Once the rescuer arrived, the surviving dog realized the woman was there to help him, and he started wagging his tail in pure ecstasy.

“We got him to the shelter and he was so afraid to go inside that he began urinating the entire way to the med room,” the shelter posted on their social media page.

The dog has now been named Levi – which means “joined by the side – loyal.” He is thin, dehydrated and covered in fleas and ticks. He has a spot around his neck that is likely due to living life on a chain. 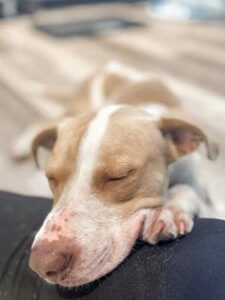 The good news – Levi is finally able to rest and feels safe.

We are so very sorry Levi lost his friend – our loyal dogs teach us a lot about ourselves too.

If you would like to donate toward Levi’s care, here’s how:
Donate directly to this post
Donate via PayPal.me/scarofms
Shop our wishlist: bit.ly/scarwishlist