In Coldwater, Michigan, a three-year-old German shepherd survived after her owner allegedly shot her in the head and left her for dead on an old tarp. Three days after she was shot, somehow the dog was able to stagger her way to the end of a neighbor’s driveway, who immediately rushed her to a veterinarian hospital.

“…she was Shot in the head (for chewing the kids toys) and left to die alone, outside in the elements and in unimaginable pain. After several days of laying agonizing pain, Janey’s amazing will to survive took over. She managed to stagger half a mile and right into the yard of Animal Aid of Branch County‘s President. (Did the neighbor dogs tell her where she needed to go? or maybe she had an angels paw guiding her…)”.

The bullet entered into her face near her temple, through her inner ear and still remains in her head. Sally and Wayne Greer decided to name the dog  G.I.Jane. 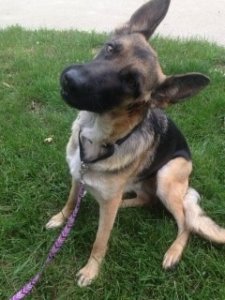 “She has medical issues to overcome but is getting great care. Janey’s will to survive stays strong and she is becoming playful and silly. Her balance is still off and she sometimes falls down when she gets too excited.”

Jane is being helped by Animal Aid of Branch County. According to court documents, Alex Carr, 21, is the owner of Jane and admitted to shooting her because she had been “chewing on his babies’ toys and clothes.”

Carr faces felony animal cruelty charges, and if found guilty could be sentenced to a maximum of four years in prison. He is scheduled to appear in court on August 17.

Although G.I. Jane’s head slightly tilts to the side, she’s had numerous offers for adoption.

Please feel free to leave notes for Janey on our Facebook page or email is AnimalAidofBranchCounty@yahoo.com.

If you would like to help with expenses, use the donate button on Animal Aid of Branch County’s Facebook page, mail or drop off at 217 N. Fiske Road Coldwater MI 49036 (care of Neitzert’s Greenhouse),, or you can text Animal Aid at 517-294-1360.