At the San Bernardino Shelter, animal advocates refused to turn their backs on Benny. His owners surrendered him to the shelter on Wednesday telling the staff their dog had stopped eating nearly a month ago. And instead of taking their blind companion to a veterinarian to find out why, instead they brought him to the shelter. 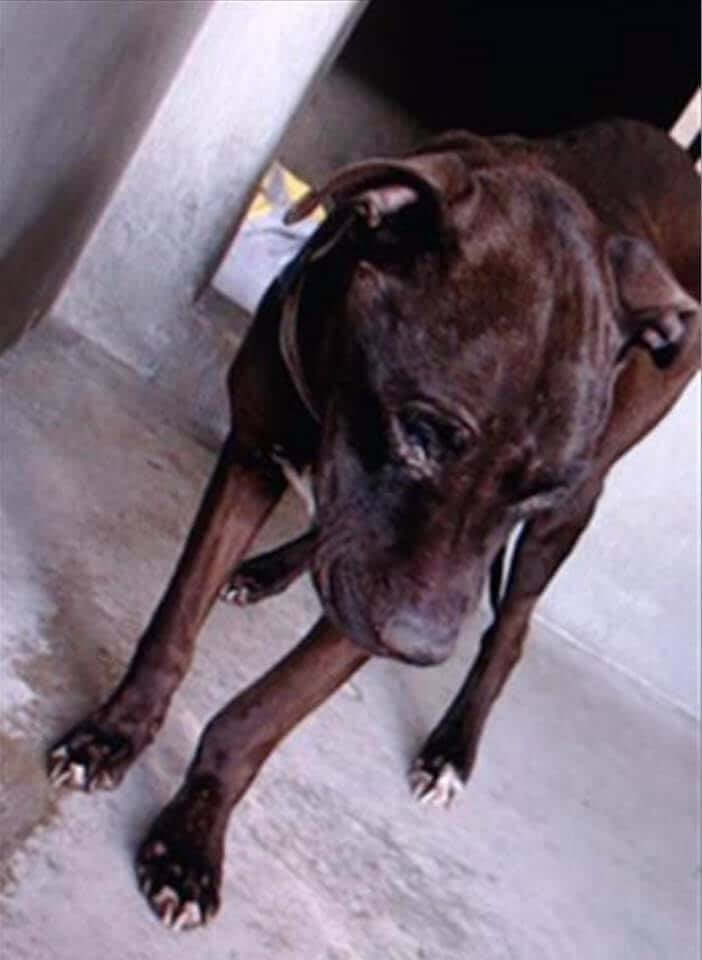 “He was surrendered to SBC by his former owners. ABOUT A MONTH AGO! They . : , , . – . He is blind. They also said he’s not dog friendly. He hasn’t been around children.”

The seriousness of Benny’s health condition prompted the shelter to send out a desperate plea for help. Rescuers coordinated the efforts, and just moments before the shelter was scheduled to close for the day and Benny to be prepared to be humanely euthanized, Benny was saved.

Paw Prints in the Sand has stepped up to be Benny’s lifeline. Sadly, the dog’s prognosis is not good, but Benny will be kept comfortable, loved and administered the best of care possible.

“They found a blood clot in the ultrasound and he may have heart cancer. We are approving the highest level of hospitalization,” Kelly Reeves, the president of the non-profit rescue organization wrote. “They are starting him on fluids, doing x-rays and blood work. He has so much gunk in his eyes and they our so sunken in from dehydration, that our vet isn’t sure if he’s actually blind…”

This morning’s updated medical report indicated Benny did not show any lung cancer. He bloodwork values indicated he has undergone severe starvation. He would require hospitalization for two weeks where he will be fed slowly through a feeding tube until he can get to a satisfactory condition where he can start to eat on his own. Sadly, Benny has been starved to the point where feeding him normally would likely kill him.

In addition, there is also a risk the blood clot could move out of his heart and kill him at any time as he gets rehydrated and fed.

“We want to try and give him the best chance at life even with his heart condition,” Kelly stated. “He has been a fighter and he deserves to feel better and gain some weight as he gets fed.

He is still not out of the woods. The blood clot could still kill him, but we are going to remain hopeful.”

For now, Paw Prints in the Sand needs help with Benny’s hospitalization and his care.

To donate towards his care, please go to www.PawPrintsintheSand.org/donate.