Early Sunday evening, a woman spotted a dog dumped in a crate in Anson County, North Carolina. The dog could not walk or stand, and he desperately cried out in pain hoping someone – anyone would help him.

“He’s twisted like a pretzel & could not right himself & he’s cold to the touch!,” an animal advocate posted on Rescue Dogs Rock NYC’s Facebook page as the organization hurriedly made arrangements to transport the dog to an emergency veterinarian hospital.

Boomer was rushed to the emergency veterinarian hospital on Sunday; he was not able to stand or walk. An MRI performed late Monday afternoon revealed he has a large tumor pressing on two of the discs on his neck making it too painful to stand or walk. No one knows how long he has been this way; his first video showing him twisted up in the crate broke everyone’s heart. 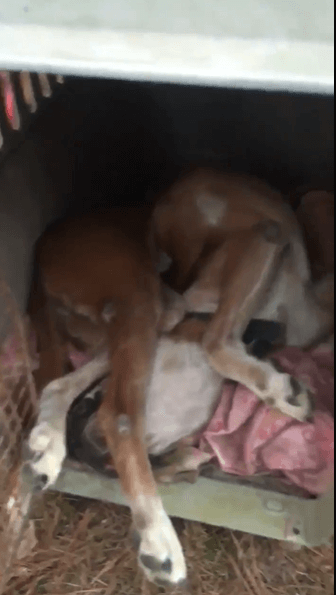 Boomer is believed to be between eight and ten years of age. It has been decided not to perform surgery on him – the spinal surgery would be too invasive and risky and may not even work. And if the surgery did work, Boomer would still have to have intensive radiation for months just to give him a little more time.

“Boomer has been transferred back to our primary vet where his is getting spoiled with soft blankets & cheeseburgers. When the time is right, we will let Boomer go surrounded by love. Boomer will be allowed to die with dignity. We wanted to give him a new life, but life isn’t always fair & so this is what we can do for him, happy that he did not die alone crying for help in that crate out in the cold on Sat. night,” Rescue Dogs Rock NYC posted on Tuesday afternoon.

We are sorry Boomer.