An elderly dog, abandoned in a pile of trash in Fort Bend County, Texas, has passed away. The 14-year-old dog was taken under the wing of Jamie’s Animal Rescue after being found by a good Samaritan on Thursday. By the time he was taken to a veterinarian, it was apparent that he was too far gone to be saved.

On Friday, the rescue group shared word of his passing with Facebook followers, writing:

It is with great sadness that I must share the news that it was Bernard’s time to rest. I do not know how long he was sick, but gosh I wish we would have met 6 months ago. I could have given him a better chance of fighting.
We didn’t know each other, we were practically strangers but at this time in his life, he was given the gift of a respectful and humane way of letting go of his pain.

He didn’t die among trash, he didn’t die discarded like they intended. His owners didn’t deserve him.
Kidney failure is a slow and painful way for the body to decline – this didn’t happen overnight.

He was comatose. He couldn’t move, he couldn’t blink, he couldn’t close his mouth, his body temp couldn’t rise, and today he started gasping for breath. He let us known it was time. He would have laid there in that trash pile in the cold for days … but he would have died alone. 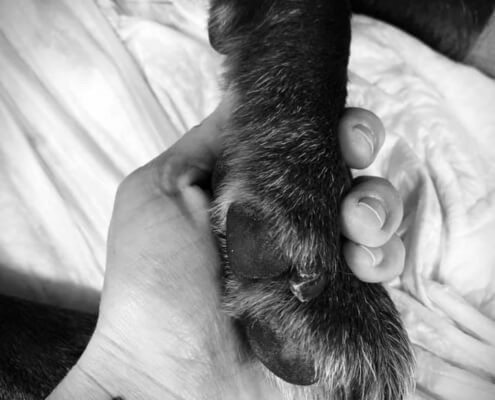 The information about this case has been provided to the authorities. Rest in peace Bernard.