This week, a horrible discovery was made inside of a home in Bexar County, Texas. According to the Wilson County No Kill Animal Shelter, family enlisted the help of the Bexar County Sheriff’s Office after failing to make contact with their sister for several days.

When the authorities visited the residence, they discovered that the woman had died, as had one of her dogs. Two senior dogs were still alive but in poor conditions. The animal welfare agency writes:

The family was desperately trying to find a rescue to help care for the dogs while they process the loss of their sister and make arrangements for the dogs. WCNKAS offered to temporarily house the two dogs, so volunteers Traci and Terry immediately rushed to the apartment to pick them up. Once the dogs got to the shelter, it was very apparent neither dog was well and they both had an awful odor.

The oldest dog, a 15-year-old retriever, was in dire condition. The agency explains:

The senior retriever was barely moving and it was obvious he was critically dehydrated. We immediately called our emergency vet and started fluid on the retriever. We also started working to bring her body temperature up just a bit. Her condition is grave and she may already have organ damage, but we are trying everything we can to help her recover. Her name tag says “Blessing.😞

Despite a valiant attempt to save Blessing’s life, it was determined that she was too far gone to be saved. The shelter writes:

Despite valiant efforts to save “Blessing,” she just didn’t have the strength to fight. She was unable to move, her blood pressure dropped significantly, and her breathing was slow and shallow. These along with several other signs indicated she was failing. With permission from the family, we made the heartbreaking decision to help her over the bridge. We tried so hard. 😞

The other surviving dog, Gabby Boy, appears to be recovering. On Saturday, the shelter provided a promising update:

Gabby Boy is doing well. He ate and drank last night and today. He also went on his first walk outside. He is nervous and easily startled, but that is expected given the life changes he has experienced in the last few days. He will be getting a full physical assessment, blood work, grooming, and anything else he needs this week. We greatly appreciate all of your support and donations to help us care for this family. We love our shelter friends and community. 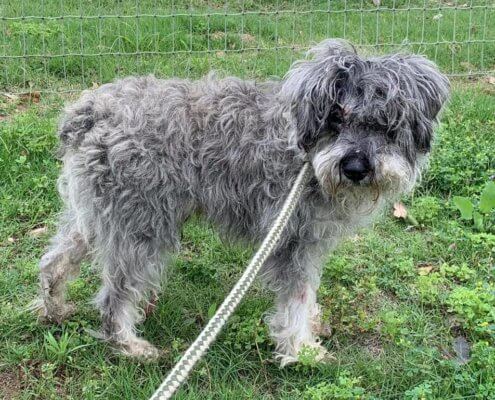 The owner’s cause of death has not been determined.

Donations to assist with veterinary expenses and ongoing care can be made via: