In San Diego, California, Louis, the blind three-year-old Labrador shepherd and retriever mix, whose owners had the dog’s eyes surgically removed because of an infection and found they could no longer care for him has been adopted.

According to the Helen Woodward Animal Care Center, Louis was brought to the rescue organization in December 2020 after his owners could no longer care for the blind dog. Louis had also previously been hit by a car and suffered a broken leg which never healed properly.

“Unwilling to care for a blind and injured dog, his owners surrendered Louis to a Calexico area shelter, where he luckily received urgent surgery to repair his leg. Shelter staff knew Louis deserved the perfect forever home and turned to Helen Woodward Animal Center to help find it.” 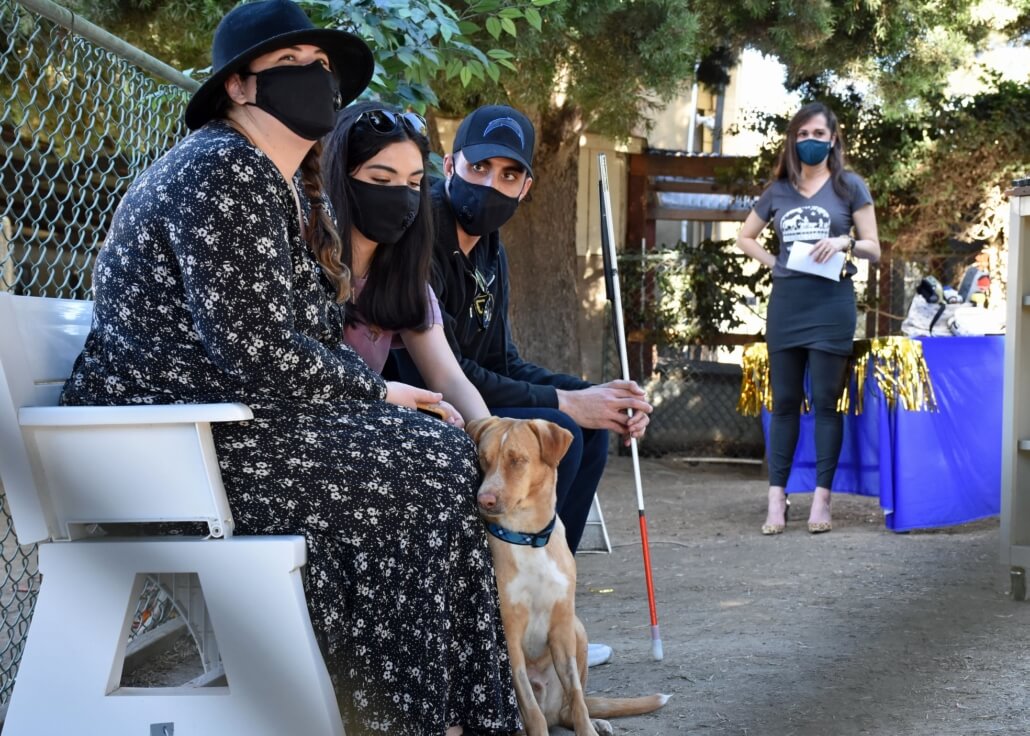 Louis’ story quickly went viral, and it was only a matter of time when a new family would fall in love. And here are the Walkers:

“The family told us that they would proudly welcome Louis into their home, filled with love for animals. Louis will share the house with other rescue pets, including a bulldog named Dragon and their bunny named Honey. In addition to having other animals to keep Louis company, someone else in the household could connect to Louis’ experience of losing sight later in life, that person being Steve Walker.”

Steve Walker is a Marine veteran who lost most of his vision at 18 because of Retinitis Pigmentosa. In spite of his disability however, Steve has remained physically active and has competed in marathons, triathlons and Ironman competitions. Although they had not planned on adopting another dog, the Walker home has been outfitted to accommodate Steve’s blindness, with pocket doors instead of swinging doors, a one-story layout and other special features. What could be more perfect for a dog just learning how to deal with his own blindness?

“We joined Louis and his new family today to celebrate the miracle of fate that brought them together and gave them a happy send-off. His foster family also came to wish Louis well and to cheer him on. While Louis’ journey with us at the Center comes to an end, his life is full of adventure ahead of him, and we can’t wait to share updates from his family once they settle in with this incredible dog.”

Check out the video: (copy and paste the url into your browser to view)

More than $25,000 has been donated to the Helen Woodward Animal Center in honor of Louis and other animals like him. His new family will have adoption and a year of veterinarian costs covered and receive 10 training sessions from San Diego Pet Training as well as a $500 Petco gift card.

Sometimes the news only gets better. Live long and love Louis.