A Houston, Texas, man was arrested and is facing felony charges for allegedly beating a senior Labrador retriever on the roof of an apartment complex. As reported by the Houston Chronicle, 24-year-old Manuel Salvatierra was arrested on cruelty charges after the authorities viewed video showing him beating a dog named Bear.

The alleged beating took place on March 29 on the roof of a downtown Houston apartment complex. According to the authorities, the video shows Salvatierra punching, kicking and dragging the senior dog, while stopping occasionally to look around to see if anyone was watching. At no time did the dog appear to do anything to provoke the attacks.

Bear has been seized from Salvatierra and taken into custody by the Houston SPCA. On Friday, the animal welfare agency alerted Facebook followers that the Labrador retriever was safely in its care:

Bear is safely at the Houston SPCA. He is a staff favorite and enjoying love and attention. 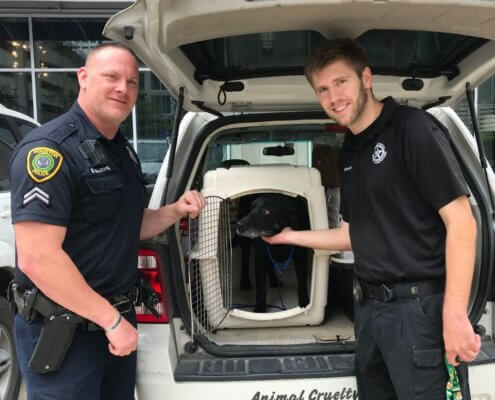 Donations for Bear’s care can be made directly to the animal shelter at this link.