A dog owner in El Molar, a municipality in Madrid, was arrested on Friday after he tied his dog to the back of his car for exercise during the coronavirus lockdown. An animal rescuer posted photos on Facebook of the dog lying dead on the ground next to the man who had been driving the vehicle:

“Yesterday this man named Carlos, along with his wife and son, decided to break quarantine and come to their second home in El Molar.

As they didn’t have anything else to do, because staying indoors like the rest of the population must be boring, they had the great idea of taking their dog out and returning with it tied to the tow bar,” wrote animal rescuer Yolanda Reyes Hernandez on her Facebook page. 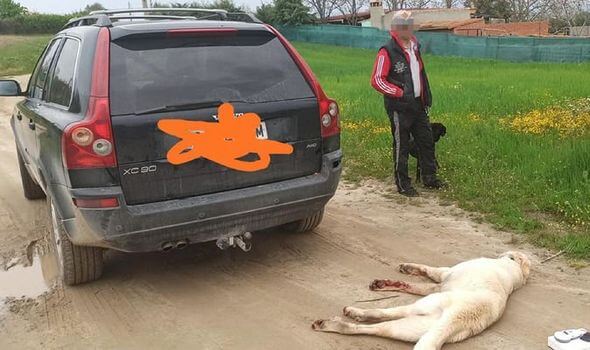 And for miles the family seated comfortably inside of their vehicle made the dog run behind – never stopping or bothering to turn around to check on him.

“For several miles this dog that you see in the photo was forced to run behind their car before it stumbled, fell and was dragged along dead after being strangled,” Yolanda continued.

“Some neighbors saw it, stopped the car, took the keys out of the ignition and called me.”

The police were summoned; the owner has been charged with animal mistreatment resulting in the death of the dog. The man spent the night in jail and is awaiting trial.

“The rest was taken care of the Civil Guard. Of course we have processed the complaint for abuse with death result, I forget the word alleged, it is not necessary, if they buffa their dog to me they bufan it. He spent the night in custody, now we have to wait for trial. I ordered the COVID test, I don’t think they do it but it was just needed to test positive, the rest violate everything, nor sure he had the car, some jewels that will fall all the weight of the law, that we take care of us. I want to take advantage to thank the neighbors who played it by intercepting these murderers, the Civil Guard of EL Molar who are fully involved in this case and Adolfo Sendino, vet of the protector and great professional who has been responsible for the withdrawal and report of the corpse.”