A mother dog, who recently lost all of her own premature puppies, has taken in a litter of orphaned puppies in Minnesota. The Minnetonka based rescue group, Secondhand Hounds, recounted Rosa’s sweet acceptance of the pups whose mother died after suffering multiple seizures.

The rescue agency writes of the situation which led to Rosa becoming a replacement mom to the orphaned puppies:

6 days ago, her puppies were born premature. None of them survived. She’s been a mom before, many times, so we can only assume she was confused. A little worried. She was still full of milk.

And recounting how Rosa adopted the newly orphaned pups:

Yesterday morning, on a reservation, a momma passed away from seizures, leaving behind 5 fat two week old puppies. Needing a momma. Our bottlefeeders were willing, but nothing compared to being with a mom.

You would have thought we gave her the 5 best presents ever. She started cleaning them. Letting them nurse. She dutifully snuggles them and counts them and loves them. They are her puppies now. ♥️ 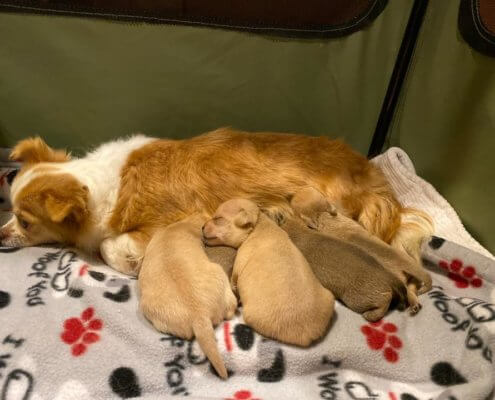 A mother’s love knows no bounds.