A Florida dog is still waiting for his Christmas wish to come true. Wish, an approximately 8–9-year-old rat terrier, ironically named because he did not receive his Christmas wish nor his New Year’s wish of finding a loving forever home.

Not much is known of Wish’s past, but he was rescued from Miami-Dade Animal Services December 10, 2020 by Polka Dogz Rescue. According to Heidi Hardman of Polka Dogz Rescue, she believes Wish was a backyard dog used for breeding only; then dumped when he was no longer useful.  When he arrived at the rescue, he was very anxious and paced in circles. Heidi took him home to foster him and soon realized Wish had no idea what it was like to live inside a home.

It took about ten days for Wish to settle in, relax and get used to living in a house. When he first arrived, he would stay out in the yard like an outcast, and Heidi had to coax him in.

After about two weeks Wish showed signs of progression by picking up a toy.  Heidi was overjoyed and figured he must have learned this from the other dogs and realized it was okay for him to do it. He grew to really enjoy his toys and loved carrying them around.  He also began showing more emotions like excitement when his foster parents arrived or when he was going to be fed.

In addition to his behavioral quirks, Wish was heartworm positive. However, it came as a surprise as to how far his heartworms had progressed, and it nearly killed him. Wish was taking his doxycycline to prepare for his first heartworm injection when his health took a sudden turn for the worse around January 7, 2021. He started acting lethargic, would not move from his spot, would not eat and his gums were dangerously white.

Heidi scooped him up and rushed him to the Veterinary Emergency Clinic of Central Florida Oakland. After a bloodwork and x-rays Wish was diagnosed with IMHA (Immune Mediated Hemolytic Anemia) due to complications from heartworm disease.

This was unbelievably bad news for Heidi and Wish as it could be fatal.  The staff at the Veterinary Emergency Clinic did all they could, but Wish would need more extensive care and treatment than they could provide.

Heidi’s and Wish’s next stop was the University of Florida Small Animal Hospital. There his condition worsened, his HCT dropped rapidly, and he was having difficulty breathing.

Wish received a blood transfusion and more x-rays to determine the cause of the anemia. Being heartworm positive created more complications and led the medical staff to believe Wish had Caval Syndrome, a life-threatening illness caused by a mass of heartworms located in the right atrium of the heart leading to cardiovascular collapse.

Wish continued his stay at UF Small Animal Hospital where he was listed in critical condition.  He received more blood transfusions and treatments to kill the worms before they threw a clot and killed him.  Wish’s survival was not guaranteed because his body was absorbing the red blood cells as fast as he could produce them.

After several days in critical condition, and near death, Wish turned a small corner. He started eating a little bit. His urine was not as bloody, and his respiratory rate decreased; all good signs as he continued to miraculously improve.

Finally, on January 16, 2021 Heidi, Polka Dogz Rescue and Wish’s village received the news they were hoping and praying for. Wish’s gums were pinker and moister, he was eating and is eyes were bright and alert;

After nine days in the hospital, three blood transfusions, one heartworm injection, several rounds of bloodwork, oxygen and round-the-clock care, Wish was going to pull through and was released to go back to his foster home.

Wish’s life has been a rough road. Like many other outdoor dogs, he was extremely neglected and never shown love until he arrived at Polka Dogz Rescue. He did not even know how to live in a house or act like a dog. Then, he almost died due to the long-term neglect inflicted on him and lack of heartworm treatment by his prior owners.

But, thanks to the dedication of his foster mom Heidi, Polka Dogz Rescue, the staff at University of Florida Small Animal Hospital and the strength and resilience of one little dog’s spirit, Wish’s life was going to change for the better. There is renewed hope for this sad dog that had spent his entire life ignored, neglected, with nothing but dirt to sleep  on at the end of a chain, and never even a toy or blanket to comfort him.

But now this miracle dog has one last wish, to find a loving, forever home.

If you cannot adopt Wish but would like to be part of his miracle, you can donate towards his medical bills on the website or the Facebook page.

Donations are imperative for Polka Dogz Rescue to continue their work and save more dogs like Wish.

We can judge the heart of a man by his treatment of animals. 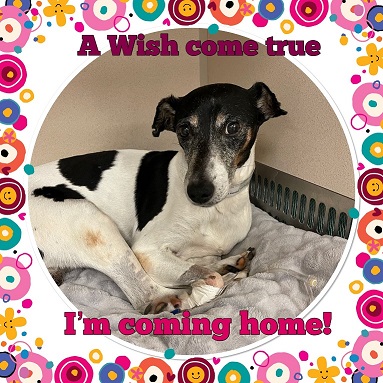