A helicopter tour company in New York City has been offering passengers along with their dogs rides in aircraft which has no doors as not to hinder views for photographing what’s below. Last year, one door-less helicopter from the same tour company crashed into the East River killing five people.

According to AbcNews, the company FlyNYON is offering huge discounts on the price – just bring your dog. In what has been called a fundraising effort to help rescue animals in the Bahamas, the company states part of the proceeds will be directed to Pilots N Paws – a nonprofit that transports rescue animals. The company’s website states they have raised $13,307 for Pilots N Paws. 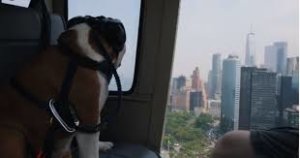 “Please ask yourself what purpose it serves to dangle a pet at 1,500 feet in the air, in open aircraft, simply so that someone could take selfies with their pet for the family photo album,” New York state director for the Humane Society of the United States Brian Shapiro asked during a press conference on Sunday held by Sen. Charles Schumer (D-New York).

What happens if a dog panics inside the small passenger seat; anything can go wrong and the consequences can be fatal. Schumer accused the company of engaging in the “greatest act of corporate irresponsibility.” U.S. Senator Robert Menendez is calling for new rules to prevent another accident and voiced his disapproval for passengers and their dogs being strapped in with their feet dangling out of open doors.

Photos and videos of dogs have been posted on social networks. The company claims they are in full compliance with all FAA operating laws.

“The facts are simple. Today, we are focused on raising money to help these animals and their human partners that are on the front line of supporting recovery efforts like those of Hurricane Dorian, not trying to score political points,” the statement from FlyNYON stated.

Senator Schumer, a dog lover, called the passenger and their dog experience on a helicopter disgraceful.