A Youngstown, Ohio man was arrested on Monday after authorities discovered a four-month-old puppy lying in a bathtub in its own feces, trembling and unable to stand. Dante Mason faces charges of animal cruelty and drug possession. 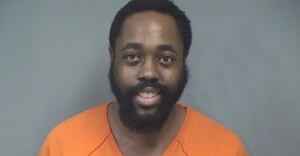 According to the Animal Charity of Ohio, the puppy named Isabella will undergo surgery today to try and save her leg. Internal injuries have not been ruled out, and she will remain in the hospital.

“She is so shy and so scared,” the rescue organization wrote. “Her little life has been such a nightmare so far.”

Officers responded to complaints from neighbors at the Red Roof Inn who said they heard crying sounds as if someone was abusing an animal. When police arrived, before entering the room, they heard several loud thumps and the sound of a dog yelping loudly.

Mason, 31, told authorities he was “teaching the dog a lesson” for urinating on the bed.

Isabella is not available for adoption at this time. Every dollar helps. She deserves every chance at the best life she can have. This is an open investigation by Animal Charity in Mahoning County.

To donate to Isabella’s recovery: