The Ohio SPCA is pushing for felony charges against a Spencerville dog owner after he allegedly starved the dog to death. According to the non-profit animal welfare organization, the black Labrador retriever was removed from his owner on July 3, rushed to a veterinary hospital and almost two weeks later, had to be humanely euthanized. 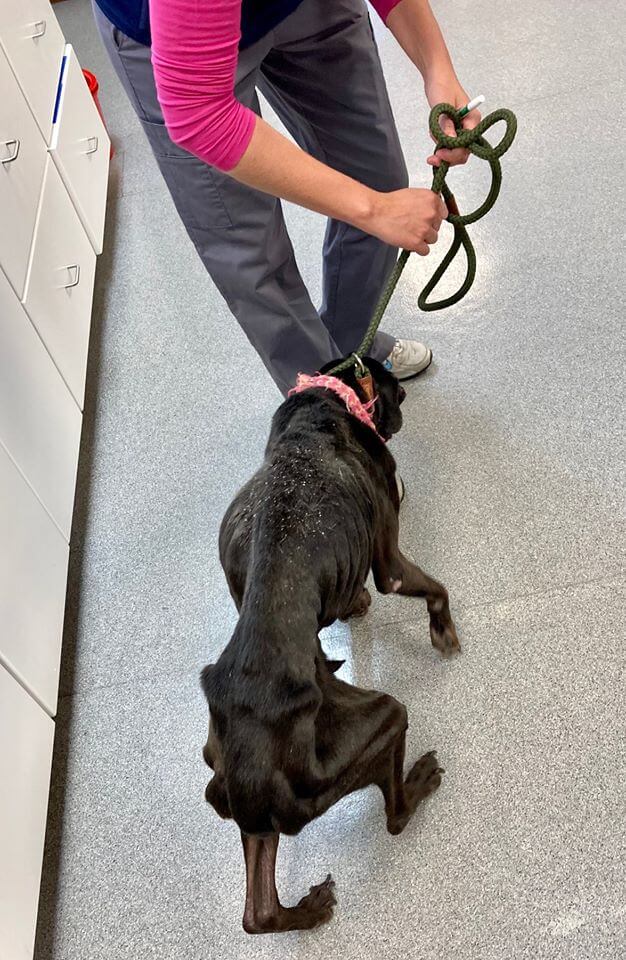 At the time, the dog dubbed Daisy Mae was rescued by Allen County Chief Humane Agent Nick Marando, the dog weighed only 33 pounds; just half of what she should have weighed. She was so dehydrated, Kessen Veterinary Clinic doctors were unable to draw blood from her veins. She was described as “literally a skeleton with all of her muscle and fat stores depleted.”

Daisy Mae was given 24/7 care to help her survive including fluids and small meals. As she was beginning to feel better and rescuers became more optimistic about her recovery, in the early morning of July 12 – her body crashed as her organs shut down, and she had to be euthanized.

Goddard’s Law, passed in 2016, makes it a fifth-degree felony to knowingly cause serious physical harm to a companion animal which includes “long term pain or deprivation of food, water and shelter.”

“Ohio SPCA Chief Humane Agent Marando has provided the Allen County Common Pleas Court prosecutor with all case reports, veterinary statements, and photos. We are hopeful that justice will be served for sweet Daisy Mae.

Animal cruelty is rampant and often it is not reported until it is too late. The Ohio SPCA encourages everyone throughout Ohio to report suspected animal cruelty and neglect to their local humane society, SPCA, or law enforcement.

The Ohio SPCA continues to need your support. Animals are removed or surrendered daily. The Ohio SPCA is not affiliated with any local or national SPCA and we receive no government funding. Visit OhioSPCA.org.”

Rest in peace Daisy Mae; we hope you get justice and your legacy will help other pets in need.