There has been international outrage this week as two purebred dogs confiscated from their owner were auctioned off to cover the owner’s debts. The photos of the dogs appeared on a state-owned website.

According to BBC Ukranian, the dogs – one a pit bull and the other a German shepherd had starting prices at $48.00; the pit bull priced much lower. The shepherd has an interested buyer.

Animal activists and opposition members of parliament have complained the dogs are being used as “bargaining chips,” and that bailiffs should not be seizing and selling innocent dogs. 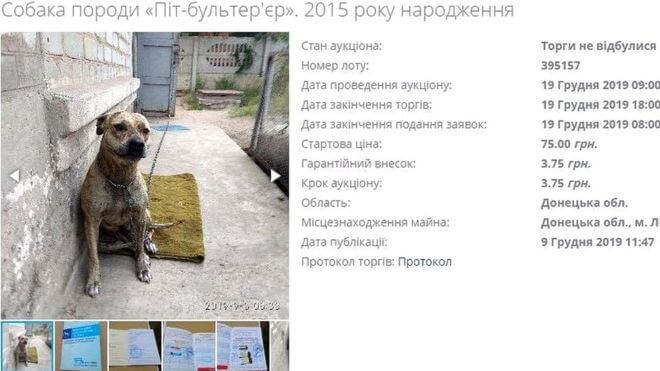 Justice Minister Denis Malyuska defended the action stating sometimes it is done for the dogs’ protection.

“We really have to confiscate pets from their owners. Even though they are taken because of their former owners’ insolvency, often it turns out for the best when pets have been badly treated.

In addition, Malyuska stated paying off the person’s debts hasn’t been the only reason dogs have been auctioned off online. Some dogs were removed after biting incidents or because a court ruled the pet should be given to someone else for better care.

Many times owners have purchased back their confiscated pets for a symbolic sum, but in this instance, Malyuska has offered to buy one of the dogs himself while seriously considering the practice of online dog auctions be cancelled.