A former bait dog, seized from a cruel situation and held for an extended period of time during a court case, has been waiting for over 700 days to be loved by a family of his own. According to CNY Central, the nine-year-old dog, named Captain Jack Sparrow, is waiting at CNY SPCA and his rather rough appearance seems to deter anyone from wanting to give him a chance. 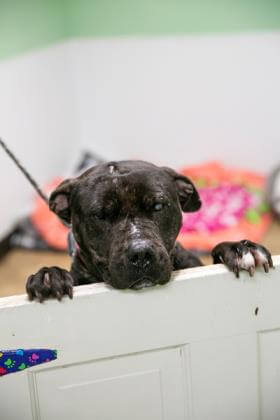 Jack Sparrow does have a rough past – and now he must be the only pet in the household. But he is an affectionate dog who enjoys the company of people. Staff at the animal shelter are hopeful that there is someone out there who can see beyond Jack’s scars and permanently injured eye – they are hopeful that someone will get to know him enough to realize that inside, he is beautiful.

In an October post on the shelter’s Facebook page, an anonymous statement was made about this long-time shelter resident:

In August, the shelter shared more information about the senior dog, from his perspective:

Since I’ve had a traumatic past, I’m not a fan of small animals and I’d need to live in an adults-only household (Ideally I’d like to be your only pet). I hope that’s not a problem. I can assure you that my heart is full of love and has been longing for a human to call my very own. One who will take me on gentle strolls around the block (I’m easy to handle!) or snuggle with me on the couch and watch endless hours of TV…especially movies where everyone lives happily ever after. I’m a real sucker for those types of movies because that’s what I want – to live happily ever after.

Interested in adding this deserving senior dog to your home? Find his adoption profile at the shelter’s website here.