In Lee County, Florida, a nine-week-old puppy was discovered with his mouth taped shut and tightly wrapped with a training lead inside of a vehicle on Wednesday evening. A Good Samaritan had contacted the Lee County Sheriff’s Office after seeing the puppy hanging out the window of a vehicle with his snout taped shut. 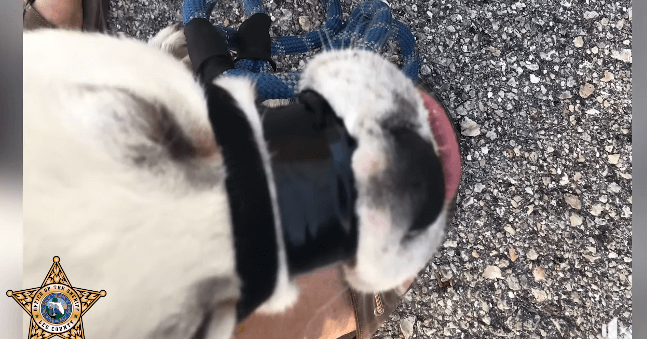 According to the Lee County Sheriff’s Office press release, deputies found the puppy in a blue Hyundai SUV in the Walmart parking lot. There was also another adult dog in the vehicle.

Authorities were able to make contact with the owners, Jaelen Anthony Barge and Allison Marie Sweck, who stated they used the training lead to keep the puppy from nipping them.

“While investigating, detectives learned the proper use of the training lead the suspects utilized is to provide gentle control to help keep a dog from pulling during walks, not to be used as a muzzle.
It was also discovered the puppies were left alone without accessible food or water.” 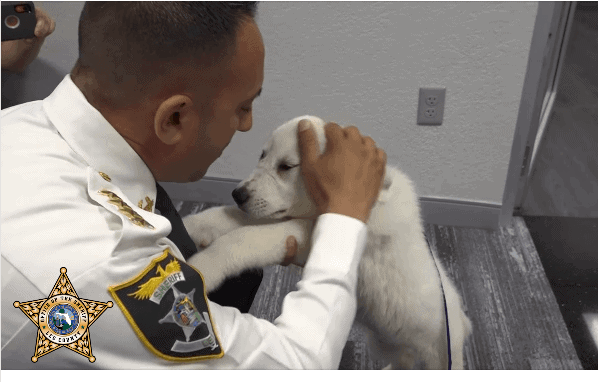 “We are also happy to report that the puppy with its mouth taped shut, a 9-week-old Great Pyrenees, is now safe and recovering at the Lee County Domestic Animal Services.”

Check out the video: (Be ready for a lot of hugs and kisses from the deputies to this adorable puppy)
Photos via Lee County Sheriff’s Office. Sheriff Carmine Marceno pictured giving kisses to the adorable puppy.
59
SHARES
ShareTweet