Several photos of a stray dog spray painted green wandering in Petaling Jaya, Malaysia have gone viral. In a series of heartbreaking pictures, the dog looked sick and weak; he had no food to eat, and no one who seemed to have cared if he lived or died regardless of the abuse and cruelty handed out to him.

It was Shazreen Othuman who stepped in and posted the dog’s photos on Facebook to raise awareness and hopefully find some help for the beleaguered pup.

Although this sad story occurred late last year, the story has resurfaced and remains a grim reminder of the cruelty often inflicted on innocent victims. Social media immediately became involved and outraged, and within a short period of time, a volunteer picked him up and gave the dog a bath to remove the toxic paint and fumes. 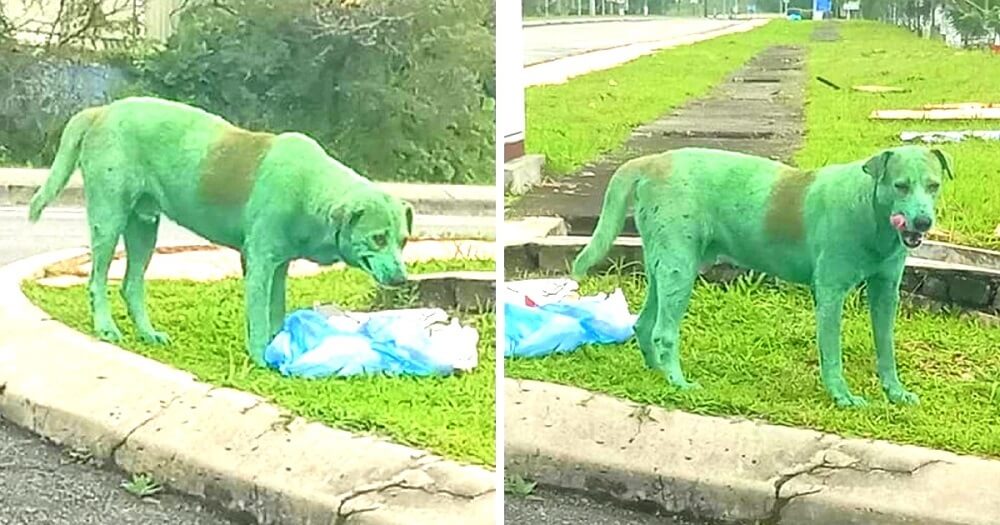 Sadly, the perpetrators have never been caught. Had they been apprehended and found guilty of animal cruelty, the animal abusers would have faced up to three years in jail.

“Stop such act immediately, because there is nothing funny about it. If not, action can be taken under Section 29 of the Animal Welfare Act 2015, which can lead to a maximum fine of RM100,000, a three year jail sentence, or both.

“Members of the public with such information or have witnessed such activities are urged to report the matter immediately to the Department of Veterinary Services Malaysia or to the nearest police station.”

Many thanks to the people who shared his story, helped him find help and are the voices for those who cannot speak. Keep up the good work.