In Paris, Texas, a puppy mill dog was surrendered on Monday afternoon to the nearest shelter by his breeder. Meet Chuckie; the breeder didn’t want the emaciated dog dying in his possession.

Besides being emaciated, Chuckie was unable to walk, was covered in mats, his skin scalded by his own urine and needed emergency treatment. Rescue Dogs Rock NYC were contacted for help, and by evening the seriously ill dog was receiving a blood transfusion and intravenous fluids. 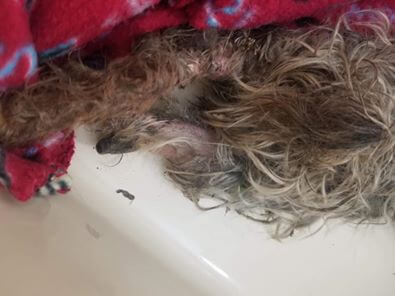 “This is what a puppy mill dog looks like!”, Stacey Silverstein, co-founder of Rescue Dogs Rock NYC wrote on the organization’s Facebook page while posting the disturbing photos of Chuckie. “With a backyard breeder! Used, abused to the point of near death.”

According to the dog’s examining veterinarian, the dog has no muscle tone; likely a result of being locked away in a tiny cage. Chuckie has never seen the outside, his paws have never touched the grass outdoors, and he’s completely shut down.

How many puppies has Chuckie sired? Sadly, those are the cute pups for sale at pet stores.

“There’s no way to stop this unless we speak up and act!,” Stacey added.

🆘🆘🆘EMERGENCY 911🆘🆘🆘Happening right NOW !!!DONATIONS NEEDED NOW !!!Chuckie is being rushed to Frisco Emergency Hospital , a 24 hour Emergency Facility in Frisco Texas It costs $2000 to walk in and clearly Chuckie needs extensive medical treatment Chuckie is emaciated , weak ,covered in mats , urine scalded and most alarming he cannot walk He needs an immediate blood transfusion and IV fluids He deserves a chance after enduring such horrific suffering THIS IS WHAT A PUPPY MILL DOG LOOKS LIKE !!!!!! WITH A BACKYARD BREEDER !USED ABUSED TO THE POINT OF NEAR DEATH This dog was brought into the nearest shelter by the breeder The breeder didn’t want him dying at the mill , so they brought this poor dog to the shelter !!!!! He has no muscle tone from years of being locked up in a tiny cage He’s never seen the outside , he’s never touched grass and he’s completely shut down When you buy a dog at a pet store , this is what the father of a pet store puppy looks like !!!! There’s no way to stop this unless we speak up and act !!! DONATIONS DESPERATELY NEEDED https://www.paypal.com/paypalme/rescuedogsrocknyc HIT THE DONATE BUTTON