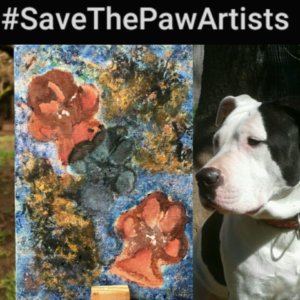 Chaplin, a rescued dog in Portland, Oregon definitely has star quality.  Like the famous actor she was named after, Chaplin, or Chappy to her friends, had a rough start in life.

Her mom PeeDee was a stray dog found roaming the parking lot of a hospital. She was so underweight, no one knew she was pregnant.

PeeDee was taken to a shelter in California, then rescued by Animal Coalition Unlimited (ACU) located in Oregon.

When ACU took her in to be examined by their veterinarian, it was discovered she was pregnant. In late 2016, Pee Dee gave birth to Chaplin and nine other puppies.

When the puppies were small, they were quickly adopted or fostered. As they grew older and displayed certain behavioral and training issues, they were returned one by one.  Only one puppy stayed with their original adopter.

Now, Animal Coalition Unlimited has Chappy, her eight siblings, and their mom PeeDee in their care again. They will have to stay in the care of ACU for the duration of their lives due to various personality traits such as dog aggression, reactive to small children and some bite incidents.

Chaplin is described by the rescue as unique.  She is somewhat fearful when brought into unfamiliar places and doesn’t take to strangers, however she quickly becomes affectionate when seeing people she knows. Sadly, she does not like children and will react negatively towards them.

Despite these traits, Chappy is a fun dog. She loves playing with water from the hose and attacking it.  This is one of her favorite games to play. She is also a very talented artist and has created many interesting and colorful paw arts.

Along with all her talents, Chappy has two very funny, yet annoying habits. For some reason known only to her, she will bark to announce to the world that she is about to do her business. This is almost like a warm-up process for her. Second, she will bang on the door when she wants to get inside, and if the door isn’t opened fast enough, she will bang on it like a human, not scratch on it like most dogs do.

Because of this unexpected long-term care for ten dogs, ACU has fallen behind in their payments to the vet/boarding facility.   If the payments are not made within 30 days, it is unknown what the fate of these ten dogs will be. Chaplin and her siblings deserve to live even if they are deemed unadoptable.

If you would like to help Chappy stay happy and healthy in the care of Animal Coalition Unlimited, you can pledge, donate, and sponsor Chappy and any of the other nine dogs through this link: