Recently, a rescue group in Missouri took in an adorable “unicorn” puppy who was rescued from the cold. On November 8, Mac the Pitbull explained why they are referring to the daring pup as a unicorn, writing:

NEW RESCUE!!! This puppy was just found along with another older dog. This puppy has a TAIL COMING OUT OF HIS FOREHEAD and a foot injury of some sort. We are thankful this baby and his buddy are safe from the freezing cold. We definitely specialize in special. 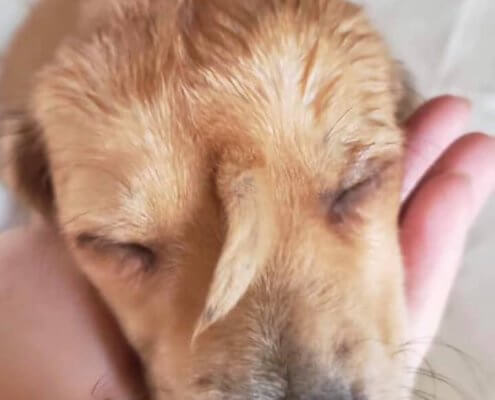 And a day later, the release of his official tail-appreciative name:

So far the tail in his forehead does not wag that we have seen. We have also named him “Narwhal the Little Magical Furry Unicorn”. He is perfect and your donations allow us to save unicorns like him, thank you.

Little Narwhal’s extra tail was evaluated by a veterinarian and it was determined that it is not attached to anything and serves no purpose, aside from making him the “coolest puppy ever.” On Tuesday, the group explained why the extra tail will likely remain:

Dr. Heuring said there is no real reason at this time for the unicorn tail to be removed (and we all wish it wagged)!! Pretty sure the staff at Cape Small also gushed all over this little nugget! The unicorn face tail does not bother Narwhal and he never slows down just like any normal puppy. He seems completely healthy other than some usual puppy worms he got meds for.

Suffice to say, this fuzzy little unicorn has captured the heart of dog lovers everywhere and the rescue group’s posts about him have official gone “viral.”

For the time being, Narwhal is not available for adoption. His rescuers want to let him grow a bit more and see if the extra tail will eventually cause any problems.

(Images via Mac the Pitbull)