The sad story for bonded siblings, Chavo and China began in July 2019 when both dogs were surrendered to Carson Animal Care in Carson, California. It wasn’t long before Chavo was adopted, but when separated from her brother, China stopped eating, became sick and started to shut down.

Life took a turn for the better a few weeks later when Chavo’s new owner returned to the shelter and adopted China; tragically Chavo had also stopped eating after having been separated from his sister.

And now – six months later Chavo and China have been returned to the shelter because their owner was moving. Both dogs are currently being held in the same kennel, however their description cards do not say anything about the two being closely bonded. 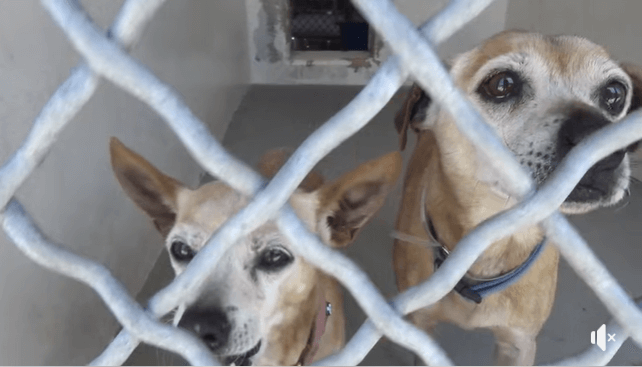 “They are in the same kennel but it doesn’t say they are bonded or related so there is a good chance they again will be separated and at this point that would destroy both of them,” a volunteer wrote.

#A5295531 “My name is CHINA and I’m an approximately 8 year old female Chihuahua. I am already spayed. I have been at the Carson Animal Care Center since 12/22. I will be available on 12/22. You can visit me at my temporary home at C213. My former family who owned me for about a year had to give me up because they were moving. But they said that I spend most of my time indoors. I seem to be good with small children. I am housetrained. I am good on a leash. I seem to get along well with dogs and cats.”