A trio of dogs – Buttons, Zara and Malti, have been dubbed “Scotland’s saddest dogs” ever since they were abandoned at the Happas Canine Centre in Angus on Christmas Eve in 2018.

Carron Jenkins and her husband, the owners of the kennel, have been caring for the dogs for the past 19 months; she is hoping they can all be placed in a loving home. The owner of the dogs had previously boarded the three little ones with Jenkins, and there had never been a problem. Just before Christmas, he dropped the dogs off again at the kennel in Forfar and stated he would be gone for a few weeks. 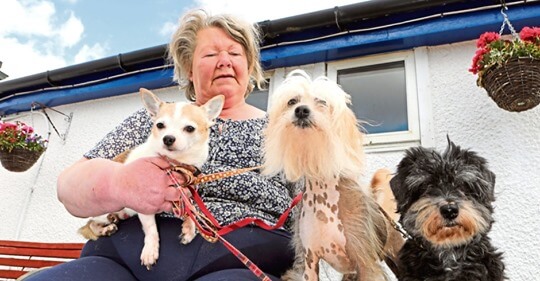 Sadly, he never came back. There was no response on his cellphone and when Jenkins emailed him, he said he was coming to get his dogs, but that has never materialized. And the Chinese crested, the mixed breed and the chihuahua became part of Carron’s family who say they love the dogs dearly, but it’s time the three get their own home.

“Buttons is the noisy one of the bunch, Malti is said to be more docile but definitely the boss, and Zara loves running around at breakfast time. Now all three are looking for a new home,” Carron said.

The dogs should go together since they are inseparable. Two of the pups – Malti and Zara have health issues, and it will be a tough job finding someone who wants to take on the responsibility of the three of them together.

All three of the dogs are very lovable; once in awhile they squabble among themselves, but they get over it, and life is sweet, but it sure could be a lot better if the dogs had a family – entirely devoted to them.

On the Happas Canine Center‘s Facebook page, the following update was posted:

“OVER THE NEXT FEW DAYS WE WILL LOOK AND ASSESS THE OFFERS FOR A NEW HOME FOR THEM , THERE HAS BEEN 4 or 5 WHO HAVE SAID THEY WOULD BE INTERESTED IN TAKING ALL THREE TOGETHER. ( NUMEROUS OFFERS FOR SINGLE ONES )

WE HAVE ALWAYS SAID WE WILL REHOME TOGETHER , AND ANYONE STILL WILLING PLEASE CONTACT US IN NEXT 24 hours TO BE CONSIDERED.”