Sky, a small, white pit bull mix was rescued from the streets of Fort Lauderdale in August 2019. When she was found by a Good Samaritan she was in horrible condition. She was skin and bones, covered in fleas and her back was all bloody from flea bites.  Watch the video of her rescue here.

Sadly, south Florida cities such as Fort Lauderdale and Miami still have ongoing problems with dog fighting rings operating in those areas. It is unknown how Sky ended up on the streets. Was she dumped there, or did she escape from some horrific home life?

Dogtoli Dog Rescue, a small rescue run on donations and located in Coral Springs, Florida was notified about Sky.   They put out a plea to all local rescues to take Sky in as Dogtoli was already at capacity. They  also set up a fundraiser to attract a rescue. No one wanted to see Sky go to the Broward County Shelter as that would mean an automatic death sentence for her. $900 was raised for Sky, who was being kept at VCA Animal Hospital. It was believed she would only need spaying and treatment for heartworms to get her healthy again.

A second rescue stepped up for Sky, but then bailed out leaving Dogtoli Dog Rescue responsible for her. Although they were beyond capacity, they could not turn their back on her. Sky was taken to a foster home in Lake Worth and began treatment at River Bridge Animal Hospital in Green Acres.

It was then that a large bump was observed on Sky’s ankle. At first it was thought to be just fatty tissue. When Sky went to a follow up vet visit, the bump had grown significantly larger.Sky was sent to an oncologist who confirmed the worst news; the lump was cancerous and had to be removed.  The only way to ensure Sky’s survival was to amputate her entire hind leg.

This was done immediately, but Sky then developed an infection on the amputation site, so she remained at the vet’s until it healed. It was quite a journey not only for Sky but for her rescuers at Dogtoli Dog Rescue.

The true hero for Sky is the Dogtoli Dog Rescue run by Melissa Bartoli and Michell Benoit. The took Sky in when they were already at their rescue limit. And they continued to support Sky even when the other rescue bailed out and left them medically and financially responsible.  Dogtoli is also very appreciative to everyone who has contributed to Sky’s rescue and medical thus far. Sky is still recovering at her medical foster’s home. Eventually she will need a permanent home; someone who can care for and have patience and compassion for an a dog that is an amputee. 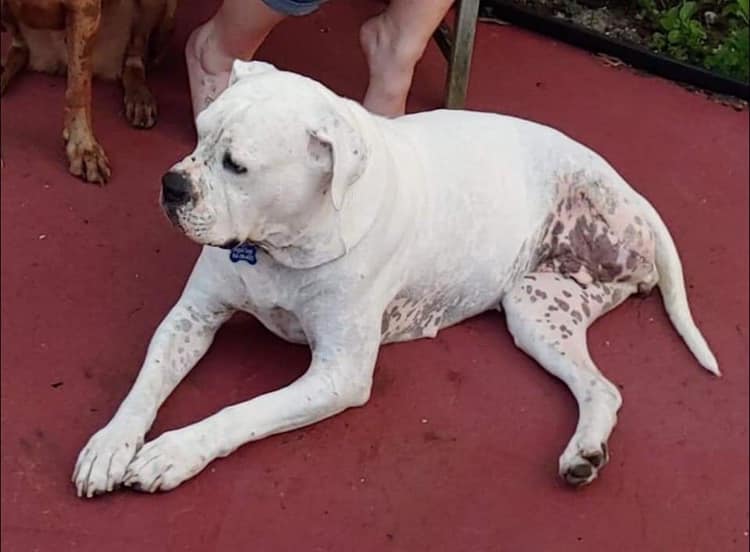 The medical bills have reached $9,000.00 This has placed Dogtoli Dog Rescue in a bad financial predicament. Once again, they are a small, independent rescue that does not get tax dollar funding or grant funding like the county shelters and local humane societies. They survive on donations only.

Or donate on the Facebook fundraiser set up for Sky