In the midst of summertime heat, someone threw a young puppy away in a Tulsa, Oklahoma, dumpster. CARE-Compassionate Animal Rescue Efforts recounted the cruel situation in a July 19 Facebook post:

Yet another animal cruelty case for Tulsa, that will be unsolvable.
We were contacted today about a puppy that was found crawling out of a pile of garbage that was just dumped from a dump truck!

This means that someone deliberately threw him into a dumpster and he was unknowingly dumped into the truck, buried under rotting garbage and compacted under the garbage several times before arriving at the dump site and being discovered by the truck driver that ultimately saved his life.

Volunteers with the rescue group went to retrieve the abandoned puppy and shortly thereafter he began having seizures and throwing up maggots. The ailing pup was transferred to the Woodland West Animal Hospital for emergency care.

One day later, the rescue organization posted an update about the puppy who has been dubbed Oscar:

This is one tough little miracle! He’s doing great and so far no more seizures! He wants to thank you for all of your prayers and donations. He will be monitored closely for the next few days to make sure he’s ok.
Thank you Dr. Ketcher and Woodland West Animal Hospital, for taking such good care of him. Welcome to your new life Oscar boy!

Donations for this little throw-away puppy are being collected at this link to the rescue group’s Facebook page. 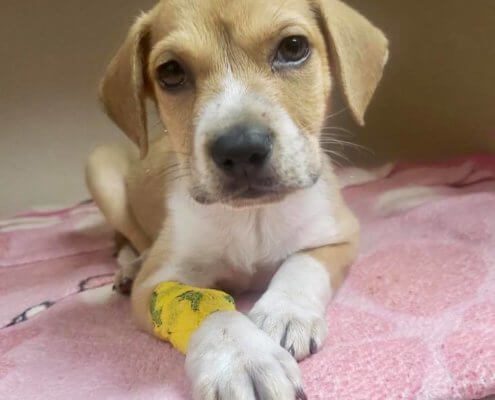