A stray dog narrowly escaped death after finding himself stranded in the median of a busy freeway in Houston, Texas. On Sunday, ThisIsHouston recounted the frightening situation on Facebook, writing:

Meet Crash! He’s got quite a crazy story! Crash found himself in the HOV lane at 59 and Crosstimbers last week. We have no idea how we got there, but he was alone and in danger. One of our team members, Kosandra, went to check on him. He was terrified and clinging to the cement barrier. When he was approached, he would run

Detailing how a concerning situation got even more frightening thanks to a drunk driver who nearly killed the good Samaritans who were trying to help:

Kosandra was parked on the shoulder along with a metro police officer and a Good Sam, Shelby. The 3 of them were on foot and tried to capture the dog together when suddenly, a drunk driver hit Kosandra’s car. Thankfully, Shelby pulled Kosandra back and out of the way. If she hadn’t, Kosandra would’ve been pinned between her car and the concrete barrier. Her car was brand new and is completely totaled and the drunk driver fled the accident on foot

Animal control eventually arrived and successfully tranquilized Crash in order to safely remove him from the highway. Crash’s fear nearly resulted in him being put down at the animal control agency. ThisIsHouston explains:

He continued to display nervous behavior and was going to be euthanized yesterday. We tagged him just in time

we couldn’t let Kosandra’s efforts and tragedy go unnoticed. He’s still very scared and he trembles when people approach him, but he’s got a quiet home to decompress in and he’s got a patient foster family.

On Monday, ThisIsHouston provided an update:

Crash is doing as best as he possibly could be, considering he’s terrified of everything. He finally came out of his kennel for food. He’s been so sweet but his tail has been stuck between his legs. Foster mom slept on the floor next to his gate last night as he whimpered if he was left 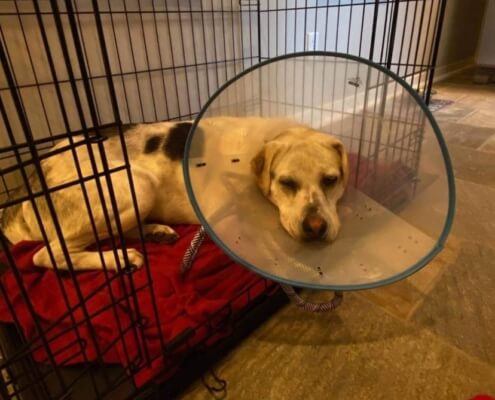 Crash’s supporters are determined to do everything to help him recover from his past trauma:

Something really traumatized him and now we’ll have to do whatever it takes to show him humans aren’t all that bad.