Dog lovers and rescuers can never read enough about the amazing abilities of our stalwart companions, and the story of a young mom pit bull named Betty just fits the bill this Easter morning.

At the  Foothills Animal Shelter in Lakewood, Colorado, Betty had been found wandering around the area; she was cold and hungry and the staff thought she looked worried. Betty had recently given birth and was still lactating.

“She had a lot of development on her mammary tissues, which told me that she had some very young puppies she was feeding,” Claire Vaiden, the veterinarian for the shelter stated in the organization’s video. 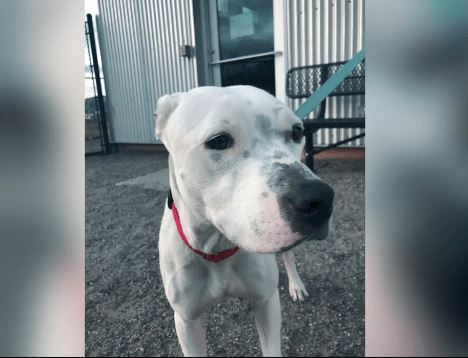 That day snow was expected to cover the region, and if there were puppies out there, they likely would not have been able to survive the cold and wet weather. And with that in mind, shelter employees decided to try something and perhaps help Betty find her recently born puppies.

And so a member of the shelter staff took Betty back to the exact area where she was found, and that made the difference. Betty led her rescuers to her four 3-week-old puppies – all girls. In honor of one of the most famous and adored actresses, Betty White – (who momma was named after), it seemed only appropriate to name the four puppies after the Golden Girls sitcom -Rose, Blanche, Sophia and Dorothy.

Check out the video from this awesome organization and check out Betty’s photos as well as her puppies.

Since then, all four puppies and Betty have been adopted.

To donate or to find your new best friend: