A Florida family treated their terminally ill dog to a fun-filled last weekend before putting him down. As reported by The Sun, the 14-year-old German pointer, named Wilson, was recently diagnosed with end-stage cancer and his owners knew that they had to put him out of his suffering, but they wanted to ensure that he had his best weekend ever first.

The Rampersad family decided to treat Wilson to water play time by a boat launch, a burger, bacon, ice cream and fries at a beach-side restaurant, cuddles, hugs and time at work with his human dad, Stephen. After Wilson’s final meal, he was taken to a veterinarian and gently eased from his failing body while cradled in Stephen’s arms. 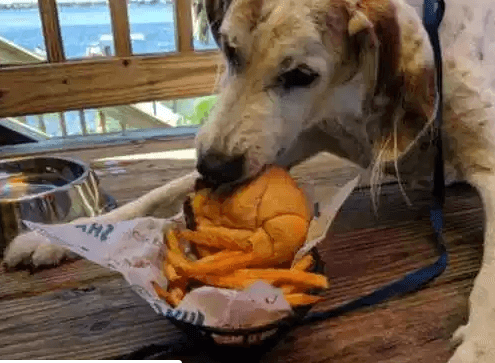 Letting the elderly dog go was devastating to his adoring family, but they knew that he had the time of his life before the end came. Stephen said “It was the best weekend we could have asked for. He was an amazing dog.”

(Images by Stephen Rampersad/screenshots via The Sun)