A Texas based rescue organization stepped up to help a 15-year-old dog on Monday, after an employee of a local Houston hotel called for help thinking a defenseless dog’s owner had abandoned her. A short time later, however the owner returned to pick up her dog and tried to surrender the pup to a local shelter. A volunteer from ThisIsHouston stepped up to help.

“The owners are homeless and bouncing around with no place to call home. We also aren’t sure how long little Nikki has been suffering. The woman had her since she was a puppy. She was very upset,” the rescue organization posted on their Facebook page.

Nikki was rushed to the emergency veterinarian hospital where she was examined; her owners stated she had not been eating and having bouts of diarrhea. Radiographs and an ultrasound tragically reveal a softball size tumor in her liver. Most likely the tumor is malignant, and since she only weighs seven pounds and is in a compromised health condition, surgery is likely not an option. 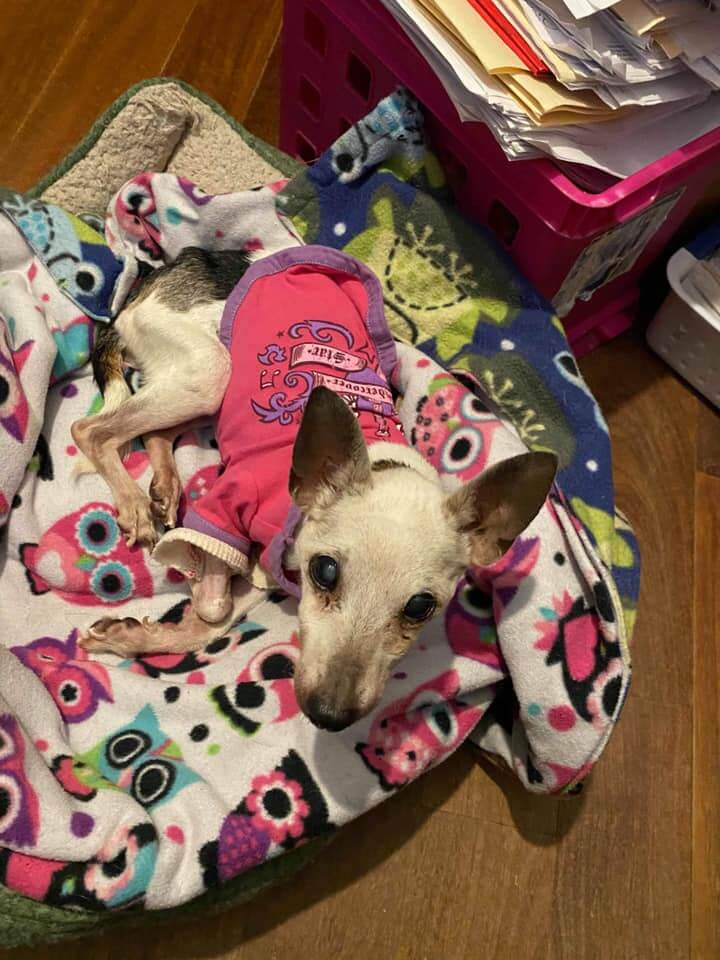 And so what to do? Three options were possible:

“We definitely didn’t want to euthanize her without a few days/weeks of love and spoiling. She’s with a hospice foster now who will pour so much love into her. She is comfortable, and doesn’t display signs of discomfort or pain. Nikki has a great appetite and the diarrhea has stopped now that she has good food in her system. We aren’t sure what she was eating while being homeless with her humans.”

Nikki’s  foster has made contact with her previous owner and broke the devastating news to her. The woman was very upset and crying; she has had Nikki since she was a puppy. Arrangements are being made to allow the woman to spend some time with Nikki to say her goodbyes.

“Nikki will let us know when she’s ready. For now, she will be very well taken care of. Many thanks to her hospice foster, Tracy, who opened her heart and home to a dog who cannot be helped. Not many are able to do that.”

Many thanks to all of the rescuers who go far out of their way to help the voiceless.

To donate to Nikki:
Call VERGI at 713-932-9589
PayPal.me/ThisIsHoustonTX
Venmo @ThisIsHouston

Many thanks to the volunteers who help our four-legged friends who have no voice.