A veteran recently fell on hard times and wound up living on the streets in Spartanburg, South Carolina. His name is Willie and it was his pit bull Roscoe who caught the eye of a man who realized that the pair could likely use some help. 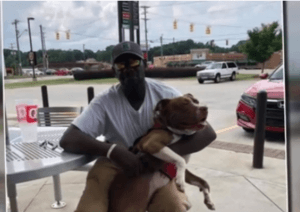 Yesterday I stopped by the QT on Reidville Rd. While pumping gas I noticed a man pushing a grocery cart with a dog sitting up front. After filling up my car I parked out front for about 45 minutes watching this man and his dog. The man, Willie, stopped at the front door, put a stainless steel bowl on the ground and filled it with water for his companion, Roscoe.

Then Willie pointed to the ground and walked into the QT. Roscoe didn’t move. He was not leashed but just sat there waiting for his friend to return. This orchestra of moves continued multiple times as Willie entered QT to get ice for Roscoe’s bowl and a few snacks for both of them.

Willie’s desire to put his dog’s needs before his own caught Eberhart’s attention and prompted him to approach the duo to see if he could help in any way. He writes:

As I sat there watching this I began to tear up. The true character of a man can be displayed in his love for his dog. Roscoe loved Willie and it was reciprocated.

I walked up to Willie, careful not to embarrass him and asked if there was anything I could do for him. I teared up again, thank God for sunglasses, when he said he would appreciate a hot dog for Roscoe. I bought 2 hot dogs and handed them to Willie. He was very grateful while feeding Roscoe before himself.

Eberhart took the time to talk to Willie and learn his story. He was told that he had moved to the area to help his family, but things went awry when his car broke down; Eberhart wrote:

Willie owns a 2002 Buick Century but it’s broken down. Without transportation he can’t get to a job, plus he needs to find a way to take care of Roscoe while he works.

After hearing Willie’s story, Eberhart decided to reach out to social media to see if some funds could be raised to help Willie get back on his feet – a simple Facebook post wound up generating a great deal of attention, and in short order, money and offers of help poured in.

Eberhart writes of the generous contributions strangers made to Willie and Roscoe:

I just want to update everyone. Willie and Roscoe are safe tonight thanks to Kimberly and her husband. I’m thrilled to announce that Seth Worley who owns B&W Property Management in Gaffney has offered to put Willie and Roscoe up in a hotel, provide him a job and has made arrangements to get Willie’s car towed to Gaffney and get diagnosed and hopefully repaired.

Seth is amazing and just jumped all over this situation. Willie was in the car with me when Seth called and was speechless at the offer. Speechless for Willie is a feat�

The generosity did not stop there – an online fundraiser created for Willie and Roscoe has raised over $13,000 thanks to over 500 strangers who have made donations. On Friday, Eberhart posted the latest update on the outpouring of help for Willie and his dog:

Willie and Roscoe have found a new home. It’s been delayed just a few more days but we are assured by Monday they will be moving in.

Not only do Willie and Roscoe have a place to live, but Willie has a new business:

Willie & Roscoe’s Auto Detailing should be up and running by the first of next week. Building the detailing trailer takes a little time but all is progressing nicely. I have compiled a second list of y’all who wish to have their cars detailed. I will reach out to all of you this weekend and request phone numbers for Willie to contact you for your appointment.

Eberhart explained how his own life has been changed by the strangers’ acts of kindness:

The fundraiser ends tomorrow. It’s hard to believe that 2 weeks ago today that I did not know who Willie and Roscoe were. In this short span of time ALL of you have donated in excess of $13,000, Willie has a job, is starting a new business and is safely off the streets. I’ve said it before but it needs to be said again, 2 weeks ago my life was all about Paul. I’ll spare you all the details but things weren’t good. While all of those circumstances and issues still remain, I have changed. You see, I didn’t save Willie and Roscoe, as many of you have commented, Willie and Roscoe have saved me.

Good still exists in the world. Read more about the fundraiser and Willie and Roscoe’s new life at this link to Facebook.