In a disturbing video on the TikTok social media network, two teenagers from Mumbai, India recorded themselves holding and swinging a stray dog by its paws and then tossing it into a pond to drown. The teens have since been identified and arrested.

According to India.com,the video showed the two boys tying up the dog’s legs. As the video continued and panned to the pond, the dog was nowhere to be seen after having landed in the water, but that wasn’t enough for the two evil kids – they threw rocks at the spot where the dog had become submerged. 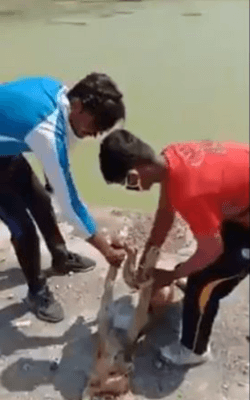 One of the boys could be heard singing in Hindi, “Kutta chala visarjan, char saal kutta jia, pannch we saal bidai. [Translation:’The dog is on its way for immersion. He lived for four years, fifth-year we bid him adieu.”]

An animal lover came across the video and uploaded it on TikTok to help find and identify the culprits. PETA India offered a reward to anyone who could identify the teens. Celebrities began to tweet about the disturbing incident, and the information spread quickly.

The teens have since been identified and arrested – Sunny Borasi, 19, and another boy identified as a minor.

Rest in peace innocent dog. We hope the boys who tortured you to death are punished to the fullest extent of the law.