Days ago, a woman contacted an Ohio animal rescue because she wanted to “dump” her elderly dog. According to the Saints Elsewhere Pet Adoption agency, the woman said that her 15-year-old collie was “grossing” her out because the dog’s back end was covered in maggots. 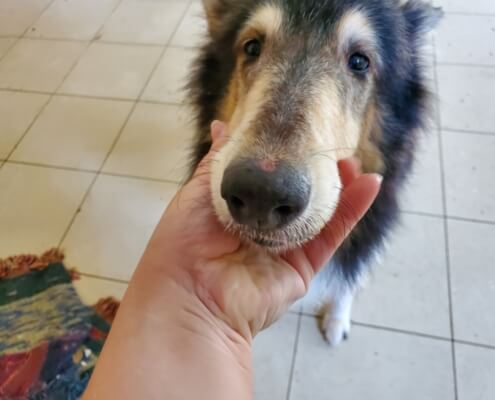 We got a call a couple days ago from a woman who wanted to “dump” her 15 year old Collie. We didn’t understand what she meant by “dump”…did she mean on the side of the road? She claimed she meant dump at a shelter.. because “isn’t that what you do”? The reason she wanted to dump her? Because her whole back end was covered in worms or maggots. And it was grossing her out. She didn’t want her other dog to get it.

The woman told the rescue group that she had owned the Collie since the dog was just two weeks of age. The rescue agency now has possession of the elderly dog, named Bandita. The group explains why Bandita is covered in maggots:

We have this sweetheart now. Turns out, she had runny stools and wasn’t cleaned properly….the maggots were in her fur and skin folds. It was awful. We don’t understand how anyone could allow this to happen to ANY animal. Let alone an animal you have had for 15 years.

She has been treated, all the maggots have been removed. She’s vaccinated and dewormed. She is as sweet as can be. Please share Bandita’s story. If interested, give us a call at 419-691-0330.

About the rescue group

The official page of Saints Elsewhere Pet Adoption. A non profit 501(c)(3) organization geared around rescuing and finding forever homes for animals that have come to us through dog wardens, kill and no-kill shelters, and surrenders.