Folks at the National Dog Mill Rescue in Peyton, CO, are evaluating 12 German shepherds. The dogs were rescued after living in horrific conditions in Weld County.

The organization’s Theresa Strader said the dogs’ owner was living in a school bus and the dogs were kept in wire cages outside with just boards placed over the tops of the cages as shelters.

“When I think of the storm we had a couple nights ago, holy cow, I don’t know if they would have survived that, just been buried under snow,” Strader told Denver’s KDVR. “I am just here to tell you it was absolutely horrifying.”

An area vet convinced the dogs’ owner to turn them over to the rescue.

“In this case, I think he thought maybe I could make some money off these dogs but the truth is, you have to be able to take care of them and he didn’t even have the most limited resources to provide basic care for the dogs,” said Strader. 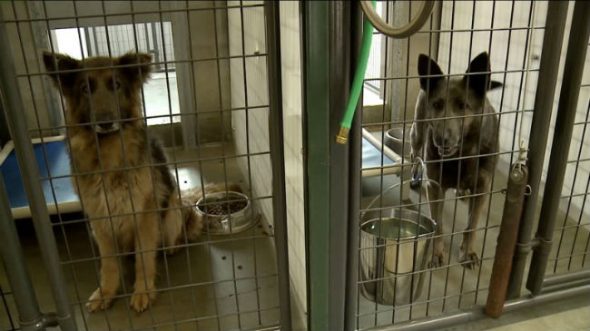 Strader said two of the dogs were a decent weight for their breed, but the rest of the German Shepherds were anywhere from starving to emaciated.

“It just rips my heart out to see this beautiful, courageous, phenomenal breed trapped like that, it’s awful, heartbreaking,” said Strader.

Once a puppy mill turns dogs over to National Mill Dog Rescue, a team of volunteers gives them much needed veterinarian care and nurses them back to health.

Volunteers work with the dogs to help them socialize. Eventually, they are put up for adoption.

Strader said it will take more time for some of these new rescues to heal after years spent in terrible living conditions, but she is confident they’ll all find homes.

“To me they represent what we all love so much about dogs and it’s just their nature, their spirit. They are resilient, forgiving, loving, and every one of them has it in them. They are going to be great once we get them healthy,” said Strader.