Dogs would never abandon their humans – even when they get old. Sadly, the same cannot be said of humans when it comes to senior pets.

Thankfully there are superheroes, also known as animal rescuers, who take in the unwanted dogs and give them the love and care they deserve.

Rochelle Steffen is the founder of Mac’s Mission, a special needs dog rescue based in Jackson, Missouri. The small nonprofit rescues dogs nationwide that would otherwise be euthanized. Many are neonatal puppies with cleft palates or hydrocephalus as well as senior dogs like Lindt. 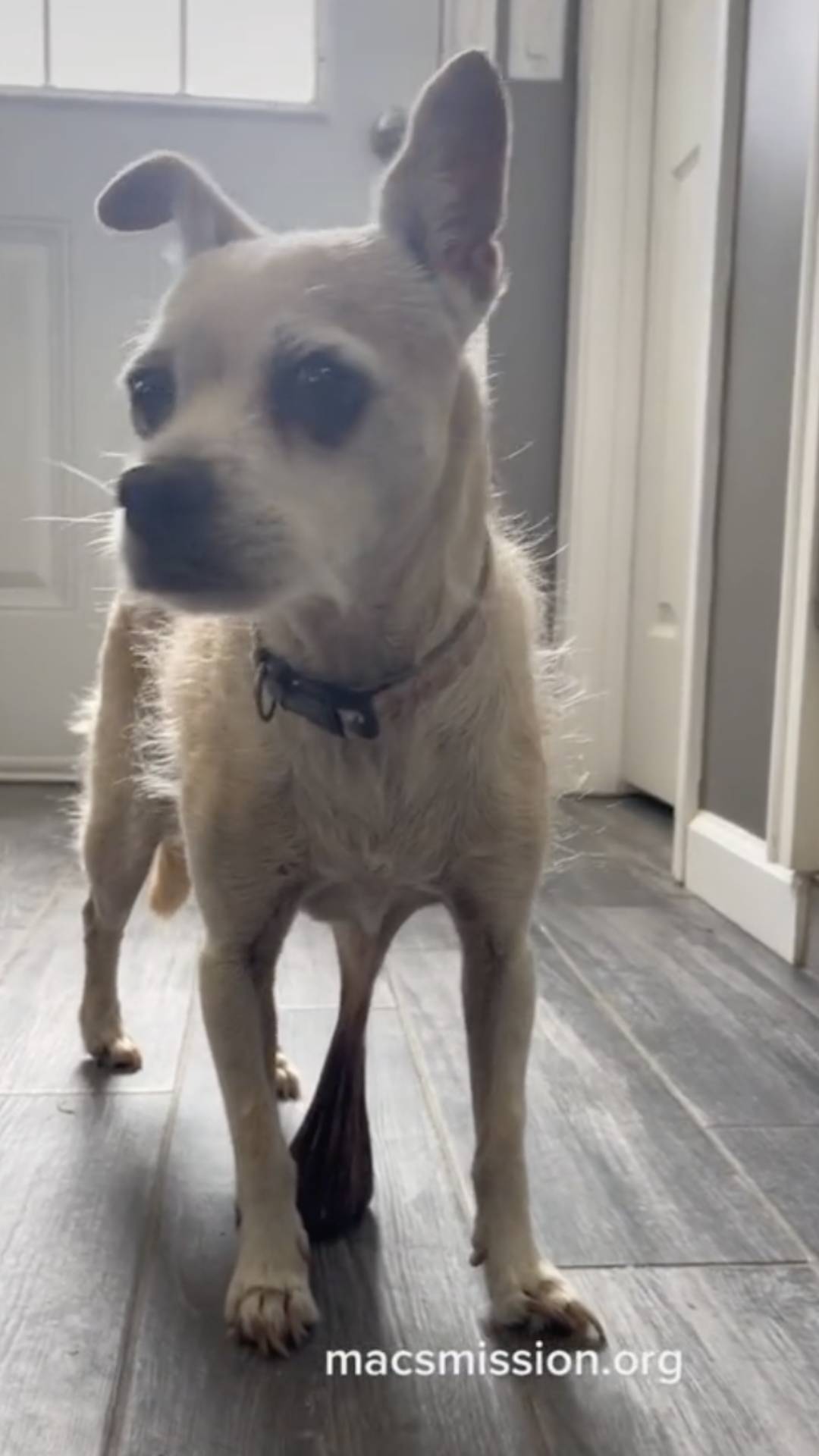 The 14-year-old dog was surrendered to a shelter by her owner who stated she couldn’t keep her because she was moving to an apartment. The senior dog is beyond heartbroken and frightened by her new surroundings.

Mac’s Mission took her in and renamed her Lindt – she was previously called Butterscotch. Rochelle posted a video of Lindt on TikTok that brought many to tears. She wrote, “Lindt is so shut down. She is 14 and has just been ripped away from everything she’s EVER known. You should really get a plan in place for your dog.”

Countless people took to the comments to say that they would never abandon their dog. Sadly, this happens far too often. Rochelle replied by saying, “This woman said the same thing and now she’s moving into an apartment. She also severely neglected this dog.”

Lindt arrived with overgrown nails, covered in flea, and a large tumor hanging off her stomach. She had her nails trimmed, received a warm bath, and had surgery to remove the tumor. The rescue posted, “This is what you guys help support. This is the 20th dog we have rescued in just a few days. And we can’t rescue anymore until we win $1 million, adopt some of these out, or foster some of these out. Thank you for letting us save this precious girl and she will be available for adoption when she is finished getting vetted.”

Lindt’s sad story has touched the hearts of many dog lovers. Several commented that they have a plan in place in case something should happen to them to ensure their dog is cared for and doesn’t end up at a shelter.

One dog owner wrote, “I literally have a plan played out in my will for my pup — including who she should go to, how to pay for it, who needs to visit, etc — she’s my child.”

Another suggested people should start assigning godparents to their dogs. 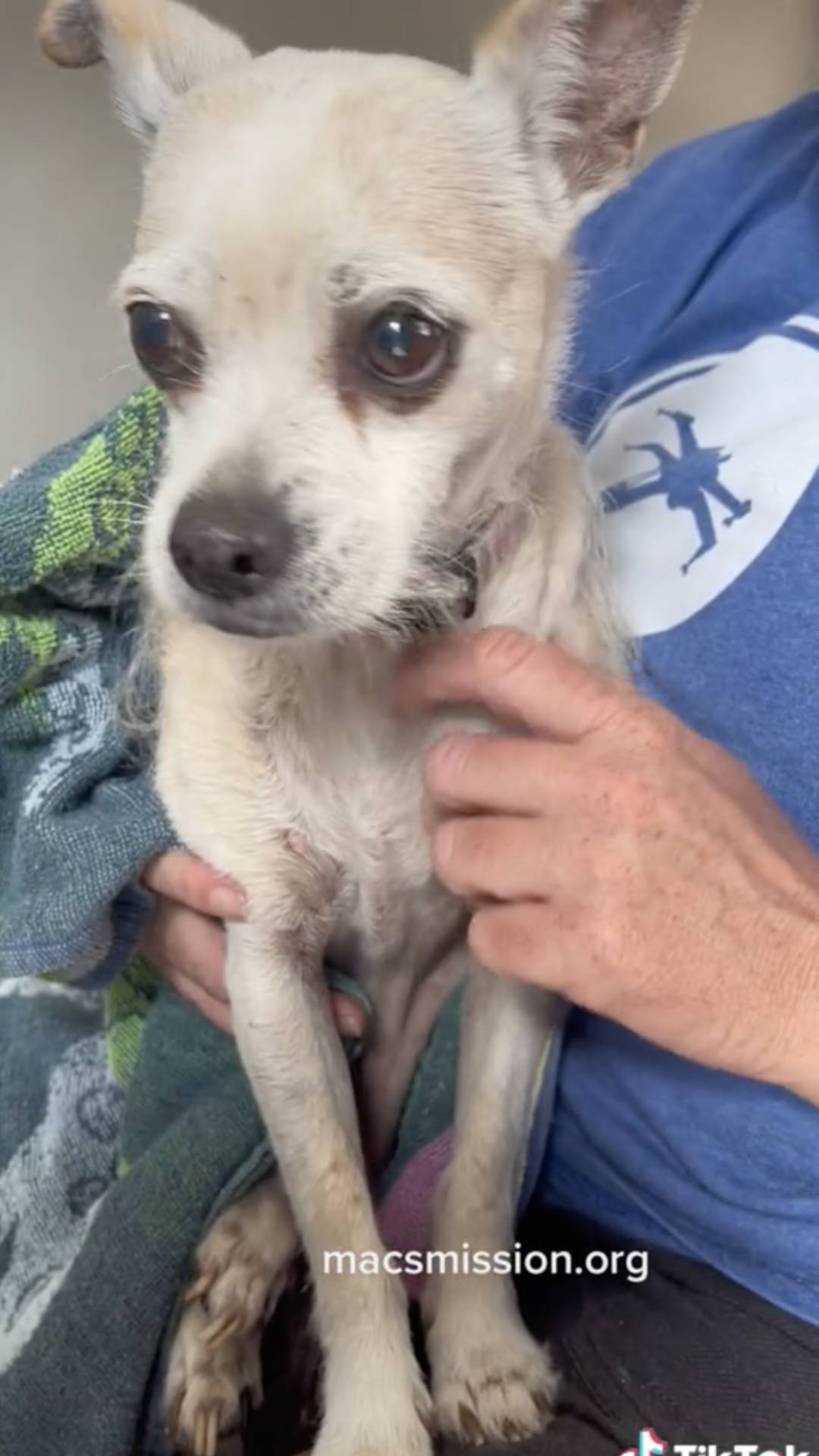 Lindt deserves to live her golden years in a loving home. People near and far are encouraged to adopt as the rescue only asks that people come to the shelter to finalize the adoption. They will happily set up meet and greets but only with approved adopters as they are not open to the public. Anyone interested in adopting can fill out their online application here.

Mac’s Mission’s federally trademarked slogan “i am pitbull strong” refers the rescue dog named Mac who inspired the rescue. Rochelle adopted the pit bull on April 11, 2011 and had ten glorious years with him before he crossed the Rainbow Bridge. “His superhero legacy will live forever in the ripple effect of this special needs rescue,” wrote Rochelle.