A neighborhood teen has been charged with shooting a family’s friendly dog in the head on Thursday afternoon in the Marquette Park area of Chicago. The dog’s owner Maritza Galindo let her two dogs out into the yard for a bathroom break, but within minutes Luna somehow got out of the yard. As soon as they realized it, the family went searching for their dog. 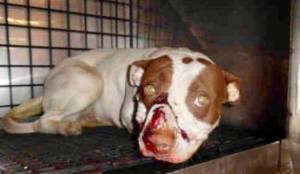 “Everybody knows her in the neighborhood,” Maritza told reporters from the Chicago Tribune.  “Here in the neighborhood, kids next door with come to Luna and play with her because they know she is not bad … She’s a pit bull terrier and that’s the thing; people always think they’re bad dogs by looking at them. They think they’re dangerous, but it all depends on how you raise them.”

Maritza’s three young children – aged 3, 7, and 8 miss their dog, but have not been told Luna had been shot in the head and is awaiting surgery. All they know is that their best friend has been hurt.

Police in the neighborhood did hear a gunshot on Thursday afternoon, and when they arrived, they found the injured dog; a 15-year-old boy had been spotted running from the scene. Officers caught up with the teen and found him holding the gun. He told authorities he was scared the dog was going to hurt him, although there has been no evidence Luna ever showed any aggression. The youth has been charged with five felonies for shooting Luna – which include the aggravated use of a weapon without a state firearms identification care, theft, criminal damage of a domestic animal, aggravated cruelty to animals and reckless discharge of a firearm. 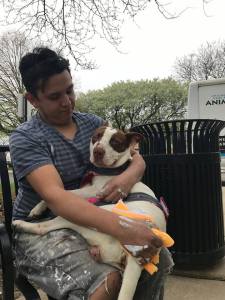 Chicago Animal Care and Control released Luna back to her family, who rushed their dog to the family vet where an X-ray showed the bullet was lodged between the dog’s eyes and would require surgery to remove it. The family was given some pain medication for their dog, but finances precluded them from affording the operation estimated to cost between $1,500 and $8,000. On the brink of tears, Maritza thought her dog was going to die – the dog she has raised from a puppy with her kids.

On Friday, Chicagoland Rescue Intervention and Support Program (CRISP) stepped in to help. With the cooperation of One Tail at a Time, a donor has been found to help pay some of Luna’s surgery. A YouCaring page can be found here. She is scheduled for surgery on Monday at MedVet; the family hopes she survives and just wants her back.