Animal abuse is a sad reality that occurs every day. Oftentimes, these poor animals are abandoned in terrifying places and left to fend for themselves.

Three of these animals were luckily saved from one such terrible situation.

Rescuers from the Stray Rescue of St. Louis couldn’t believe their eyes when they were called to help three dogs left stranded in a drainage ditch.

“This is crazy,” the rescuer said once he arrived to the scene.

And it sure was. It was an unbearable scene for any animal lover (much like the pooch found in India with severe sores on his skin). The dogs were panting and barking with absolutely no way of escaping on their own.

What’s even worse? It was clear someone tossed the dogs into the ditch, as it was a big leap for them to get down there in the first place.

One of the brave rescuers, however, had no problem jumping in there to save them, even though he had no idea if they were aggressive or not. He lifted each dog high enough for the rescuers up above to grab them safely.

Like the rescuers who rushed to save a dog stuck in an open well in India, this man’s efforts are worth commending.

Then the Stray Rescue of St. Louis rescuer was the one that needed some help getting out. 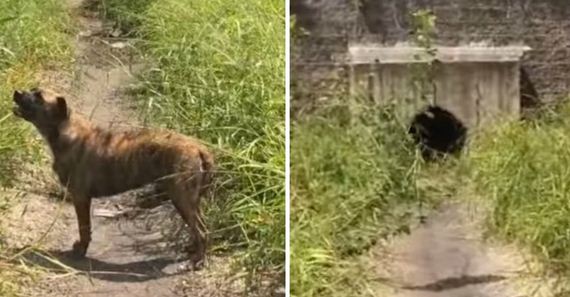