Every pet person on Earth has wished they could know what their pet was thinking at some point. Why are they looking at me that way? What is my dog trying to say when he’s been whining for the past hour but won’t go to the bathroom? Why does my cat pace in front of the couch? Most of us have come to terms with the fact that we will never know the answers to these questions.

Then there are those who decided to “do something about it” and create products that can supposedly tell us what our pets are thinking.

Yup. I am sure you are immediately thinking “doggy psychic” or “kitty telepathy.” But these three companies claim to have used science to unlock the code of communicating with your pet.

The Japan-based company Anicall has created a smartphone app that works with a collar you place around your dog or cat’s neck. The collar measures vital signs such as heart rate or body temperature. But what about your pet’s mood? 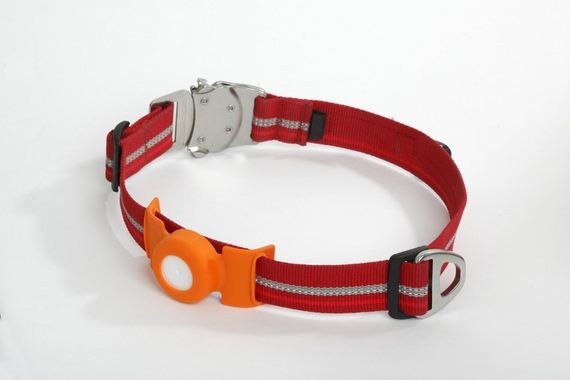 The company claims their app can tell you if your pet is happy or sad by a picture you take with your phone. The app can analyzes over 40 different movements to tell how your pet is feeling. 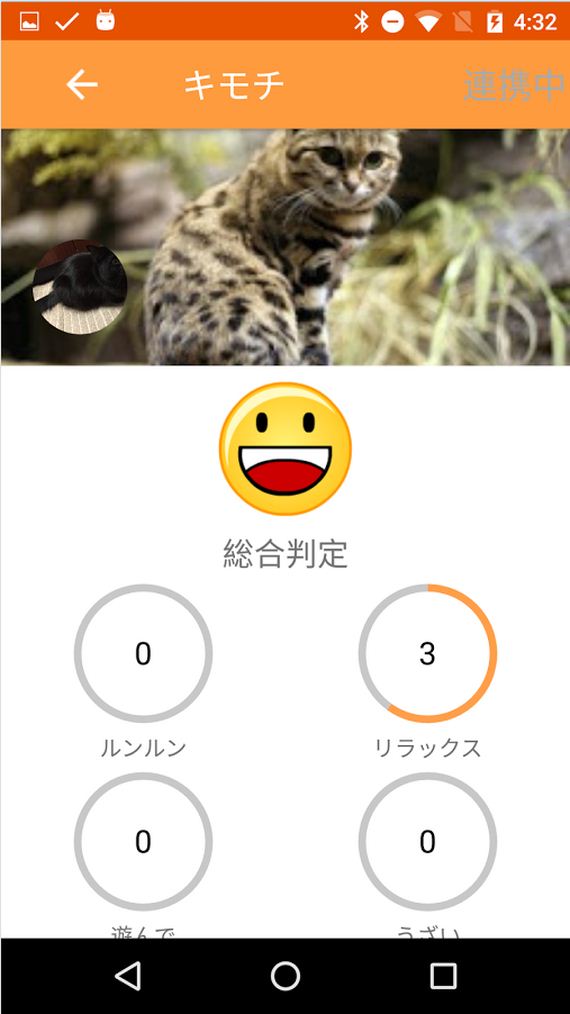 Snap a pic, and the app can tell you if your pet is happy or sad based on measurements of the ears and mouth. 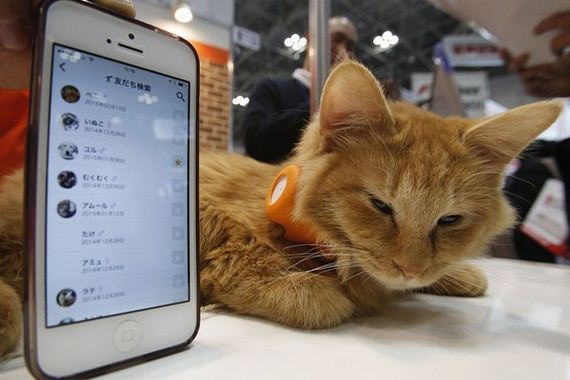 Currently, you must be near your pet with your smartphone in order to use the app – so you won’t know if kitty is happy while you are at work or not. The app available on Apple and Android for free. But You have to buy the collar to go with it, which is currently sold on Amazon Japan for approximately $30.57 USD. 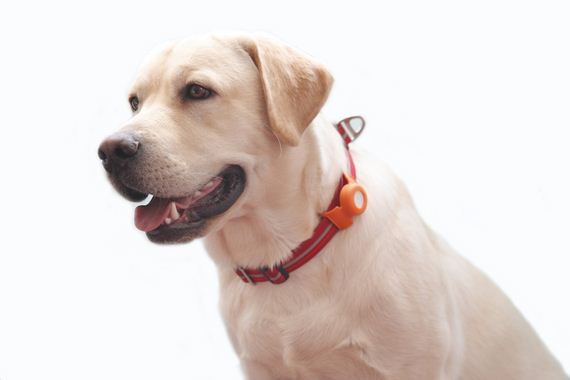 Do you remember the scene in Back To The Future where Doc tries to read Marty’s mind by sticking that ridiculous contraption on his head? That’s what I think of when I see this product…it looks like a headset for your dog.

But instead of reading his mind, the Swedish organization behind No More Woof claims that the headset can translate his barks, woof, growls and grumbles…into English! It is then spoken through the speaker. Yup, that’s right. This product claims to be a dog to English translator. (With French, Mandarin and Spanish versions planned). 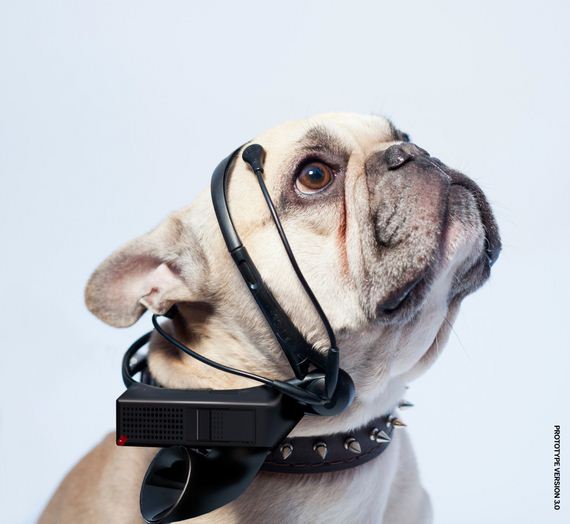 And what voice will you hear? The company is planning on offering a choice of “voices” so you can match one to your dog’s personality. 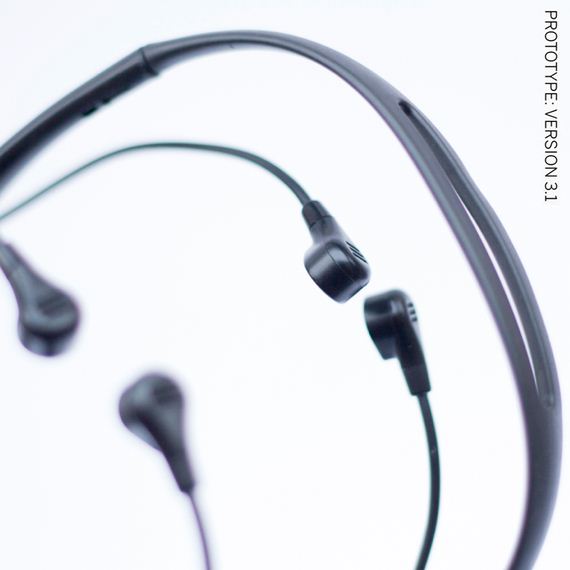 With a ridiculously successful Indiegogo campaign two years ago (They raised 227% of their goal in just two months) the Nordic Society for Invention and Discovery is still working on versions.

But how does it work? 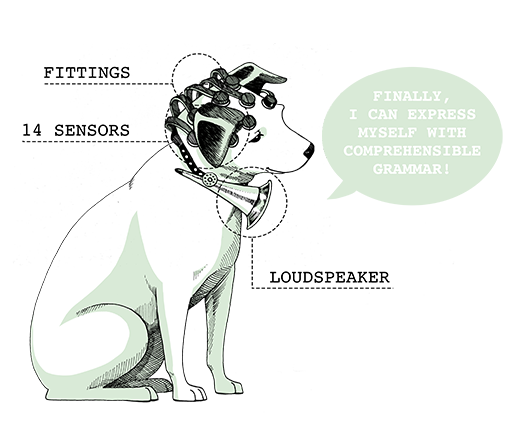 Science. The company claims they have created a way to use your pet’s Electroencephalogram (EEG) readings, then use a “new brain-computer interface (BC) to detect, analyze and translate the brainwaves of dogs into comprehensive thoughts.” (nomorewoof.com)

“For instance there is a spectrum of specific electrical signals in the brain defining the feeling of tiredness (“I’m tired!”). Some of the most easily detected neural patterns are: “I’m hungry,” “I’m tired”, “I’m curious who that is?” and “I want to pee”.

(It is worth pointing out that dogs “think” in a different way than humans. Whereas the dog’s brain signals might indicate hunger, that does of course not really mean the dog is “thinking” that, it’s rather more a mental state than a “thought…”)”

This product is currently not available to purchase. For more information, you can watch their short informative video below:

Fetch, a pet store from the British online supermarket Ocado, has developed its own way of translating what your dog’s bark means. Unlike the No More Woof, this product is just a simple collar that connects to your wifi and your smartphone, where you will get texts from your dog in English!

Just what you always wanted – your dog begging you to feed him from the other room. 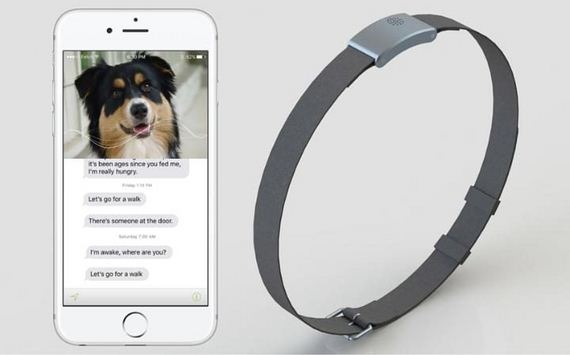 The collar has a built-in microphone, as well as features that measure sound, movement, body position, timing and location. 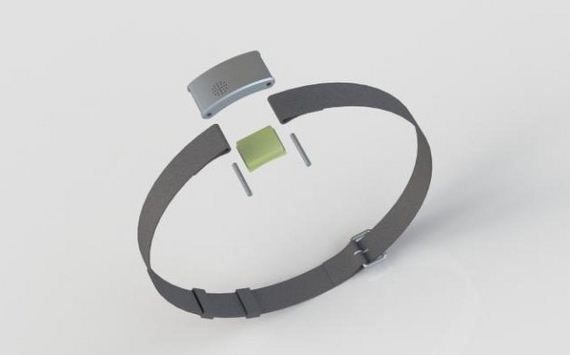 According to their news release:

WhatsYapp is described as the world’s most advanced communications system for dogs. It uses smartband technology to analyse a dog’s sounds, movements and activities, resulting in a direct translation to an app on your phone.

WhatsYapp is broken down into two distinct areas that combine together to create a predictive behavioural translator for your dog.

Data that comes from the dog itself. The device attaches to your dog’s collar and has an in-built microphone and many features that you’d associate with a smart-watch, which monitors sound, movement, bodily positioning, time and location.

The collar connects to both the owner’s smartphone and the local wi-fi in the home.

A selection of unique, discrete low-energy Bluetooth stickers (ibeacons) are supplied with the collar which the owner can stick to key locations in the home, e. g. doors, dog bowls, bed and utility areas to create a pet-smart home. 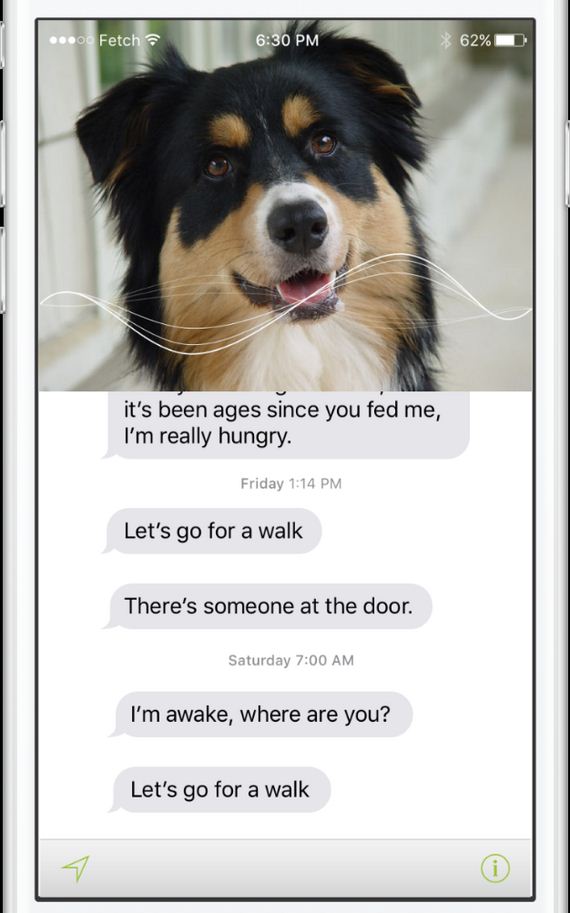 This collar was chosen by customers of Fetch, who voted between three innovations. They are now working on a prototype.